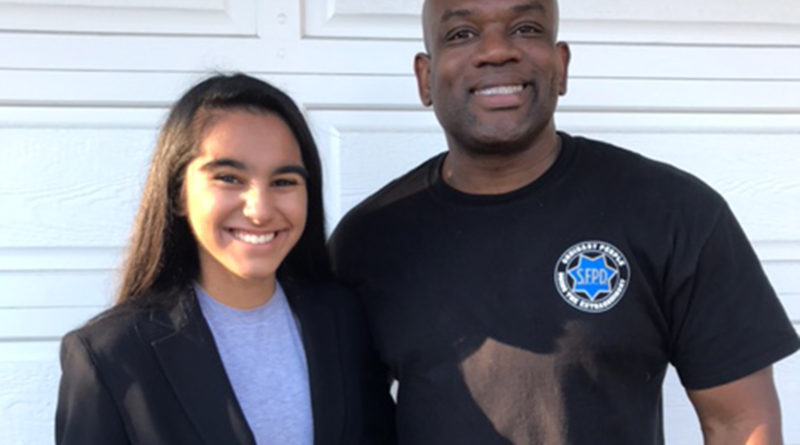 Q: I want to talk to you about the impact of police within schools. Do you feel like this is an important role? What role do officers play in high schools essentially?

A: SRO stands for school resource officers. They are supposed to help with students in crisis who have issues, facilitate the staff in taking kids engaged in bad activities or unlawful activities out of the classroom safely without disrupting the other students. I think it’s a great thing to have the officers there. You know as well as anybody with Columbine, Sandy Hook, and all the school shootings people want them there for safety reasons.

Q: There is great concern over the schools to prison pipeline, about how more students in schools are being forced into the criminal justice system early as a result of having police officers in schools. I can see that the SFPD sees that as a problem and you are trying to divert students away from the criminal justice system, so how does that work?

We don’t think it does until you absolutely HAVE to. If they are a danger to society, then I think we absolutely have to remove them. But if they’re not, we can get them back into the flow, it helps everybody because you know your tax dollars, you don’t want them going to someone we don’t need to house… And so the training for the SROs is more to turn a kid away from that (the criminal justice system). Or once they get into it, how to counsel them and get them out of that.

Q: How is the public image of police officers? How have movements such as Black Lives Matter affected officers?

A: You know if you had asked me probably about six months ago I’d have said, ‘Oh God things are TERRIBLE out there,’ but they just did a Gallup poll. Our popularity has not been this high since 1967. I mean, we’re soaring. And the reality is, with San Francisco, 96 percent of the city loves them and embraces the police department. Four percent have an issue and that’s part of B.L.M. (or Black Lives Matter) and some of the different coalitions for some of the controversial officer shootings…It still is incumbent on me to reach out to them and bring them into the center, work with them. And so that’s one of the goals. But our image with the public has been pretty high…

One of the big things that we have to do is adjust our Use of Force Policy, which was a big win for the community because for the first time in history of our police department, we brought in the community: the American Civil Liberties Union, the Public Defender’s Office, and different groups from all over sat down to help us craft the policy. So bringing the public in has been a complete game changer because they’ve taken part ownership in this thing and a lot of times people just want to be involved in the process.

The other issue I think law enforcement has in the 21st century is the public image issue. We did a lot when the federal Department of Justice came in to look our department. One thing they realized is that the department does a lot of stuff in the community, kind of like the “Bicycle for Vets” today. But the department doesn’t talk about it a lot, and I said true!…We put it out there, but it’s up to channels to air it. Most of the time they don’t, because unfortunately we are now in an age where it’s about Keeping Up With the Kardashians. It’s about the Housewives from wherever. You know it’s about reality T.V. and four hours of news goes to, “if it bleeds it leads.” And if you really think about the news; the guy looks at you. He says, “Good evening!” and then tells you why it’s not! “Good evening! Four people killed in this…car rolled over and a mother and daughter drowned in the water.” I mean it’s like you said good evening; where is the good evening part going to come from?… I’m just saying that the direction has gone a different way and no one wants to hear, “Hey, you guys are giving bicycles for veterans? That’s great!” It’s just not news, unfortunately.

Q: How do you go about implementing each of the recommendations given from the Department of Justice report, and how do you make sure that you have enough funding for each to make sure they’re implemented fully?

A: The 272 recommendations were broken down into A, B and C categories. Some of the recommendations needed to be implemented immediately. I mean even the red-line things that need to be done now, like the banning of one of our tactics called a carotid hole, where you apply pressure to the carotid arteries and you basically render the person unconscious if they’re fighting you. They want to stop using that. So the immediate stuff is the “A” priority. The “B” stuff is the data collection, so that we know, for example, why there are disparities in our traffic stops, or stops in this group more than that group. The “C” priority is minimal stuff that’s easier to fix. So we broke them down and once we did that it gave us kind of a timeline.

For the “A” stuff we did a 30 day window to fix up those things, the “B” stuff, a 60 to 90 day window. In the “C” stuff, 60 to 180 days to fix it. I think that’s probably the easiest way to deal with these and then develop teams and each team; like if it had to do hiring, it went to my Deputy Chief of Administration. If it was about traffic stops, then it went to the Deputy Chief of Field Operations Bureau, because he has all the patrol units that there would be doing those traffic stops. So every group was broken down like this and sent to a deputy chief.

Q: With these new recommendations that are coming in, how is policing different than when you started? How much is the same?

A: It’s completely different! Our use of force policy was archaic…I think we all just kind of kept doing the same thing until time caught us and passed us up. Technology caught us and passed us up. And now we’re running to try to catch up… Now with cell phone technology, you’re actually seeing people videotaping breaches in use of force policy. That’s the bad news. The good news is, every time you see a police officer doing something, you see some people’s cellphone, right? Tens and tens of thousands of hours of footage every month, but you see none of it. That’s because 99 percent of officers are doing it the right way and it goes in the trash bin in the phone, because there’s nothing to show…And I’ll be honest with you, people are real funny. They like videotaping but they do not like being videotaped.

One of the big changes is body cameras for all my officers. I think in most agencies that put body cameras on officers, their complaints have fallen off a cliff, and I don’t think that’s because people are lying. I think it’s because the body cameras have the effect of making people on both sides of that lens behave better. And it’s funny when people think, “Man somebody may see me acting like this.” They really stop themselves…

Now, more than ever, police officers find ourselves in these situations where, in a blink of an eye, you have to make a decision and here’s the worst part. CNN, C-Span, everybody’s gonna run it… They’re gonna show that slow motion; you don’t have that time when these things happen, but the problem is, people look at the video for three, four weeks. But now imagine you’re standing there and this guy’s doing all this stuff and you’re thinking about Dad, Mom, never seeing them again…They’ll make it fit their narrative and that is the hardest part of this job, because sometimes you know what really happened. And they’re reporting something completely different…but we can’t talk about it. It’s an ongoing investigation. It’s just one of the toughest parts of the  job, knowing what really happened as opposed to what’s being reported…And a lot of times the first thing folks will do is, they’ll sue you. And the statement will come out: “We can’t comment on that; there’s pending litigation.” That’s the police side. Now the side suing? They can say anything they want. Whenever they want. And the press loves it.