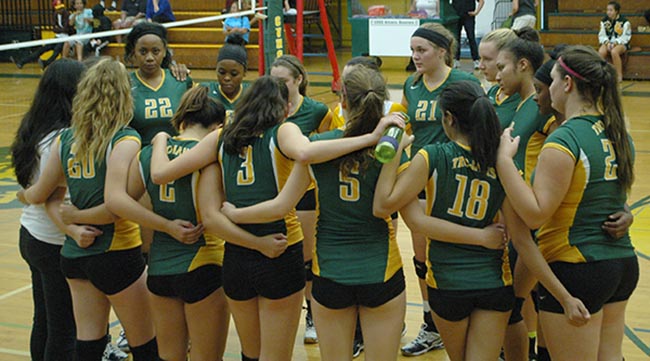 The Castro Valley Trojans and the San Leandro Pirates faced each other in an exciting volleyball game on Wednesday, Oct. 21. Although the Trojans lost in the first three sets, it was a well-fought game by the girls varsity team at Castro Valley High School.

“I think we did good overall. San Leandro is a really good team and as long as we keep up our energy and fight hard, we will end up with a great record this season,” senior Ivie Johnson said.

After this game was over, the Trojans’ record changed to 11 wins, 13 losses, not bad at all for a high school volleyball team.

The first set ended 25-16 to the Pirates, but the Trojans stuck through it until the end. In this first set, after an excessively long rally by both teams, junior Nikki Jensen leaped into the air and cleverly hurled the ball to the opposite side of the court with incredible force.

The second set was a dramatic improvement, and although the Trojans gave it their all, they still were four points shy of winning when it came to a close. Throughout this entire set, all the players yelled words of encouragement to their teammates to get the team spirit up and raise the intensity of the game.

Throughout the third set, the girls got a little complacent and dejected, and the score dropped to 16-24 with spirits on the down side. The coach called a time-out, needing to get her team in the game. After a concise pep talk about playing their own game, and not paying attention to the score, the Trojans ran back onto the court with a newfound sense of hope and energy. They managed to score five points all in succession to the delight of the crowd and many fans after finally conceding one quick point and giving up the game to the San Leandro Pirates.