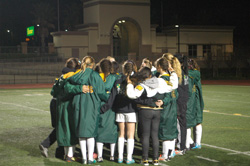 Down by one, with only a minute left in the second half, the CVHS girls soccer team worked hard to fight for a win in the Feb. 21 NCS game against Berkeley High School.

As the ball switched between the two teams every few seconds, the tension rose for both the teams, and even the bystanders. With 30 seconds left, the Trojans gained possession of the ball, swiftly dribbling down the field, relentlessly trying to score a goal. Within 15 seconds, the Trojans were in Berkeley’s 18 yard box, swiftly passing around the defense, giving it to an open player. A Trojan shot towards the goal, but Berkeley’s goalkeeper easily blocked the shot.

The referee blew his whistle to signal the game was finished. The final score was 1-0, with Berkeley taking the win and the Trojans’ season came to an end.

Losing to Berkeley for the third time in the most important game of the year was not the way the girls wanted to end their season. However, the team still ended the year respectably with 12 wins, eight losses, and four ties. Even though the Trojans did not win a medal, they played better and worked harder than many teams in the league.