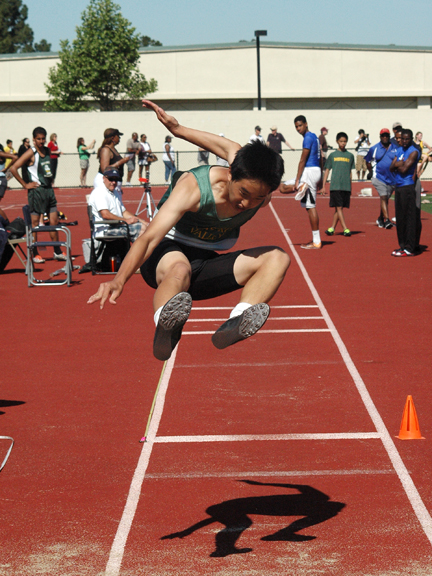 The dedicated and hardworking track and field boys were undeterred by the baking heat on Saturday May 12,and they brought fierce competition to the Hayward Area Athletic League championship meet at Trojan Stadium.

The boys varsity finished fourth in the league, the team’s lowest finish since taking sixth place in 1962, 50 years ago. The frosh-soph boys took second, though.

The frosh-soph boys have had a great season, both in practice and at meets. Every year the CVHS track team welcomes new and talented runners, and this year was no exception. A combination of hard work and talent have led to the team’s success on the field and on the track.

In the 4×100 relay, the first event of the day, frosh-soph runners Gundi Pranay, Cameron Edwards, Matthew Williams, and Valdis Birznieks took second with a time of 48.28 seconds.
Sophomore Kendrick Calkins left competitors in the dust in the 100 meter hurdles with a winning time of 18.57 seconds.

In the high jump freshman Dane Clemson showed off his skills and won the event with a best jump of 5’4”.
After waiting all day to compete in the last event, Antonio Aquilar, Matthew Williams, Pranay Gundi, and Ben Nakaya raced to first place in the 4×400 relay with a time of 3:46.7.

It’s been a tough season for the varsity boys, with tough competition from Bishop O’Dowd and Hayward High School at most of the meets. Although they took fourth in league, the boys are looking forward to coming back and winning league next year.

Myles Speegle took third in the varsity 100 meter race with a time of 11.16 seconds and will be one of few varsity boys to continue on to NCS.

Freshman Carter Mackey took fourth place in the 1,600 meter race with a personal record time of 4:43.08. Mackey is a talented athlete whose impressive abilities running long distance have earned him a place on the varsity team.

Evan Locke will also continue on to NCS after taking first place in the pole vault with best jump of 11 feet.
Also excelling on the field, junior Jake Mitchell won the triple jump with a best jump of 42’11¾’’ , 2’5 ¾’’ further than the second place jumper.

Steven Gissentanner took second place in the varsity high jump with a best jump of 6 feet, and Anthony Vivieros took second in the shotput

“Track and field 2012 has been, in short, has been an amazing experience. I’ve met many new people, from both our school and other schools, deepened my passion for running, and enjoyed many fun experiences from being on the team. It has been a great way to end the school year, and being a freshman, it has been a great way to start my high school career. I’m looking forward to being on the team and competing next year,” said distance runner Kevin Morimoto.