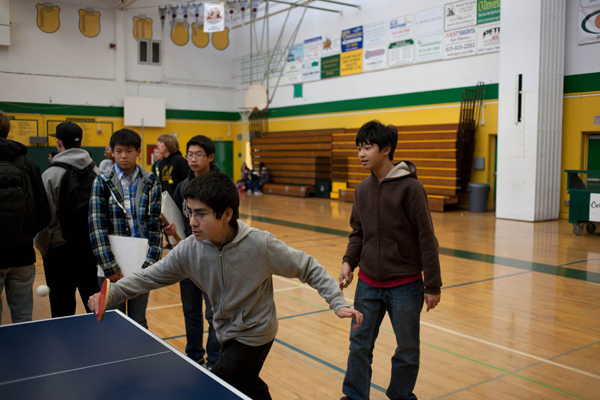 “I feel like I have the bragging right over a lot of my friends since I called that I would win from the beginning,” Diaz said confidently of his and Ou’s win.

The tournament began with thirty-two teams which were then turned into sixteen by elimination, then eight and so on until only two were left to battle it out. By round four only four teams were left.

As Team Apple went against Boom Squad, it was obvious where Boom Squad had gotten their name. After each point they scored they were literally booming with shouts of enthusiasm and taunts for Team Apple.

However, Boom Squad was defeated by Team Apple and Team Apple moved onto the last round to compete against America.

“Don’t talk to me about the ping pong tournament,” said Josh Khan of Boom Squad jokingly, still recovering from his team’s elimination from the tournament.

America defeated Brian Team and also moved on to the last round. Cash Carmody and Jamal Woodard of America put up a good fight, losing by seven with a score of 21-14.