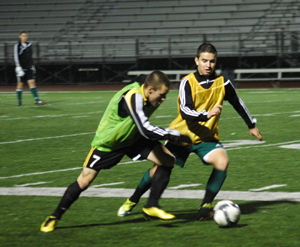 Though Trojans battled hard, they failed to place in this year’s winter tournament. Boys varsity soccer played a total of four games to end their preseason. Although they failed to grab their first win, they showcased what we can expect to see during the year: a strong Trojan defense with strong communication and constant movement.

In the first of the four games the Trojans battled hard against Foothill. Struggling to keep composure throughout the game, it all fell apart near the end of the second half for the Trojans. One lucky goal later, the game was over.

In game two the Trojans set their sights on Granada, but were denied a win again. Barely scoring near the end of the second half and securing a hard earned tie, the Trojans struggled. Although the game was difficult, it served to show this newfound team the level of competition they would be going up against.

In game three the Trojans were truly shown what it would take to become a top team when put up against Richmond. Although the game was another struggle, the Trojans managed to hold them until half. However after half, the whole team started to break down. It was a different game from first to second half. Through a series of breakdowns in the midfield and defense, Richmond managed to put in a total of four goals before the game was over.

In the fourth game, however, the Trojans truly came to play. Earlier in preseason the Trojans played against James Logan and lost in a 4-0 defeat, but time it was their shot at redemption. In a show of true heart and passion they battled to prove the previous score wrong. In the last 15 minutes of the game, though, goalkeeper Kurtis Louie was given a red card and sent off for foul language after an unfortunate goal was scored. James Logan won, 1-0.

This year is going to be a rebuilding year for the Trojans soccer team. After losing eight starting seniors last year, the team is still searching to re-establish its talent.