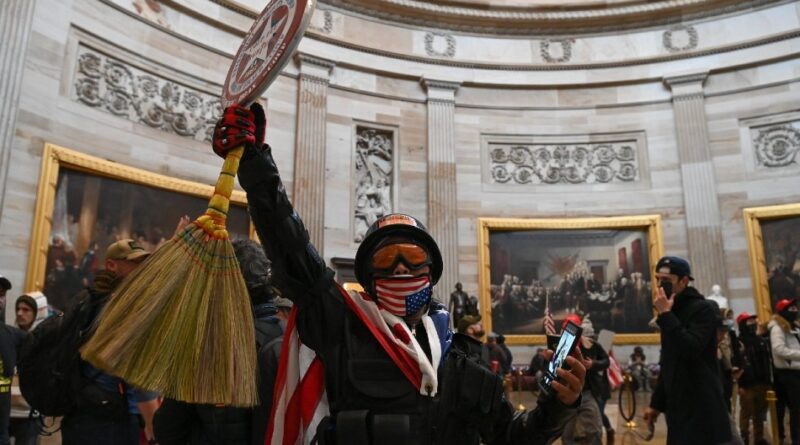 Enter any Filipino household and chances are that lying in a corner of a kitchen closet, there rests a special type of broom known as a walis tambo.

So what the heck was it doing in the Capitol Rotunda?

With an upside down American flag draped across his body –as if cosplaying as some kind of superhero reject– and with the Filipino broomstick, branded with ‘Coup Flu Fighter,’ in hand, “Walis Tambo” Man was a part of the panoply of surreal absurdity that distracted from the real violence of Jan. 6, 2021.

This was not the kind of Asian-American representation in our government I was seeking.

It’s been exactly a year now since I saw this photo and it still stays with me. What motivated “Walis Tambo” Man to participate in the Capitol riot?

Moreover, why did 34% of Filipino-Americans in the 2020 election support Donald Trump? Even more confounding, why do 75% of Filipinos approve of Philippine President Rodrigo Duterte?

What these two politicians have in common is their political strategy of undermining one of the pillars of a functioning democracy: the free press. Their weapon of choice is social media.

Duterte openly threatens the free press with violence and routinely arrests journalists, one being Filipino investigative journalist Maria Ressa. Her work includes reporting on the spread of government propaganda on social media in the Philippines and the horrors of Duterte’s war on drugs. She was recently awarded the Nobel Peace Prize for her fight for freedom of expression in the face of authoritarian governments.

During her acceptance speech in Norway, Ressa accused U.S. internet giants such as Facebook, of being “biased against facts and journalists” and using their “God-like power” to generate division, continuing how “our greatest need today is to transform that hate and violence, the toxic sludge that’s coursing through our information ecosystem.”

This “toxic sludge” contributed to the Capitol insurrection. Trump fueled a disinformation campaign to erase a basic fact: the election was free and fair.

At every turn, like a constant drum beat from 2015 to 2020, he called the press “the enemy of the people” and “fake news,” flooding the American public with an average of 50 false or misleading claims a day, an analysis by the Washington Post.

The American free press is an important institution of our democracy and the only thing that could refute politicians like Trump and his disinformation campaign, which fueled the anger of people who sincerely believed the election was stolen.

That’s where the connection between Trump and Duterte lies for that’s what authoritarians do: undermining the free press so they can shape the narrative that fuels their power and influence.

Over a century ago, “Filipino insurrectionists” led a true revolution. This was no Walis-Tambo-type circus gimmick.

It was one that fought back against American imperialism through establishing the Malolos Republic, known as the First Philippine Democratic Republic and the first democratic state in Asia. This revolt was so consequential that it would spark the beginning of the Philippine-American War in 1899, a nearly forgotten part of U.S. history that barely warrants a paragraph in most high school textbooks.

What will definitely end up in history textbooks will be the tragedy that took place at our nation’s Capitol on Jan. 6, 2021. “Walis Tambo” Man may never be anything more than an embarrassing footnote.

Frankly, I don’t know much about him other than that his real name was Kene Brian Lazo who was born in Ilocos, Sur in the Philippines. He immigrated to Norfolk, Virginia where he became the owner of a steel erector business; and, like many others, felt compelled to travel to Washington D.C. to “Stop the Steal” at the behest of Trump.

Politicians like Trump and Duterte will come and go. Whatever short-term personal gains achieved through threatening members of the press will be short-lived.

The damage they have done, however, to the long-term health of the democracies of the U.S. and Philippines has yet to be seen.

What we know for sure is that the free press is not the enemy of the people; it’s the people’s best chance to speak truth to power and hold those in power accountable.

One thought on “Filipino Insurrectionists – On Trump, Duterte, & the “Walis Tambo” Man”