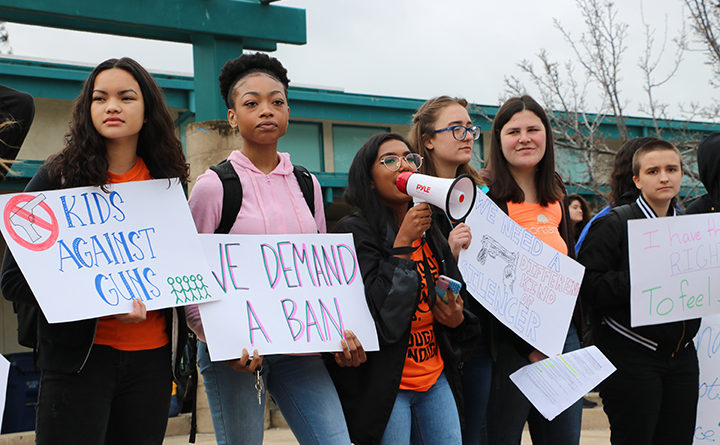 Over 150 CVHS students participated in the gun violence protest organized by the Muslim Student Association (MSA), World Citizens Club, and the Black Student Union (BSU) on Wednesday, March 14. As a part of the movement across high schools nationwide, students took 17 minutes out of their day to honor the 17 victims of the Parkland shooting.

Throughout the protest, passionate students stood up and spoke out on the importance of putting an end to gun violence. The protest was not only a stand against the recent school shootings, but a cry for stricter gun laws. Not only did it show that students were protesting for their lives, but it was an indication of how change is needed to before it is too late.

It is clear that more work has to be done in order to make the national movement on reformed gun laws and gun violence successful. Based on the fact that National Rifle Association and guns rights supporters spend billions of dollars promoting their lifelong commitment and agenda, it may be that advocates for increased gun control must take bigger steps in promoting this message to fully achieve their goals. The turnout of CVHS students for the protest was one step in the right direction.

It’s important to recognize the empowering students who played a role in promoting more effective gun laws, but only around 5 percent of the CVHS student body got involved with this protest. Some factors like apathy, the consequences of being tardy to class, and concerns regarding effects on grades may have had an impact on the attendance of the protest.

Perhaps with more involvement from the rest of student body, involving activism and eventually voting, a bigger impact can be made.