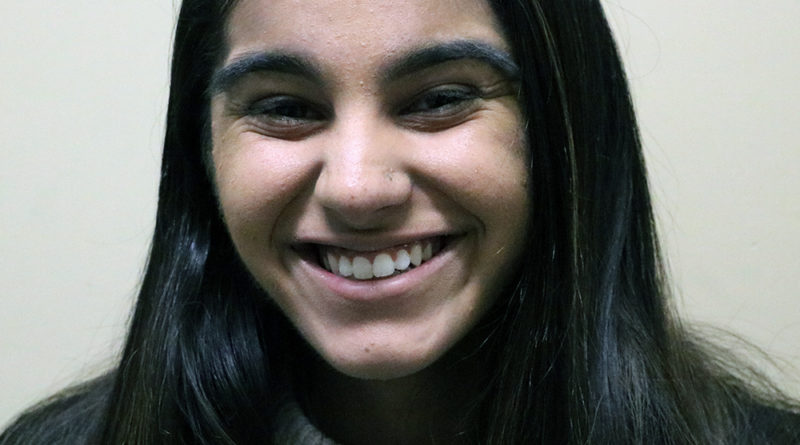 In the aftermath of the Parkland shooting, America once again confronts the prevalence of weapons of war on our streets. Discussions surrounding gun control, regardless of how frequent they seem to be becoming, follow the same circadian rhythm: heightened attention on the issue, a silent consensus of “gun control was never going to pass anyway” and on the next topic. But this recent mass shooting on Feb. 14 seems slightly different. One explicit differentiating factor is the laudable and courageous activism of the Parkland High School students immediately after witnessing the death of their peers. They have been a force to reckon with, organizing several national marches on Washington, debating their Senator Marco Rubio in a town hall hosted by CNN, and spreading their cause on social media. Yet in the face of all this, it leaves many to consider, will their actions actually work?

The NRA or National Rifle Association was founded in 1871 by two Union veterans who wanted to improve the marksmanship of Northerners, and increase education surrounding firearms. In the 1930s, the NRA was one of the top gun control groups and sat down with Former President Franklin Roosevelt to draft the National Firearms Act and Gun Control Act of 1934 and 1938. They continued to support gun control until the proposal of a national registry of all guns and when the Bureau of Alcohol, Tobacco, Firearms and Explosives broke into a member of the NRA’s house and killed him based on suspicions that he was carrying illegal weapons. Since then, the NRA has evolved to view every single piece of legislation as a threat to the Second Amendment.

That brings me to the next discussion: how did they become so powerful, effective, and influential in US politics? According to Robert Maguire, who tracks spending among political nonprofit organizations for the Center for Responsive Politics,  “What’s special about the NRA is that it has two sources of its influence. The first is its very deep pockets. The second is its almost unparalleled grass roots support.” They outspend gun-control advocacy groups almost six times in terms of campaign contributions. Their followers are extremely likely to vote based on the sole issue of gun control, with the NRA even “grading” politicians on their gun rights views. (Marco Rubio, for example, is ranked as an A+ and received over 3 million from the group in his career.)  But in fact, cigarette, pharmaceutical, and insurance industries spend far more, sometimes five times as much, on lobbying.

Given those statistics about the NRAs spending relative to other lobbyist groups, why is it so hard for Congress to pass gun control or even discuss it? Well, first off, Republicans are not punished in the polls when they vote against gun control, so they’re unlikely to change. Americans in general are extremely polarized on issue, with a 59 percent partisanship gap, therefore, especially for gun owners/NRA members, this is the defining issue in an election. Gun advocates are much more dedicated to this cause than non-gun owners, and public opinion on guns tends to change around times of mass shootings, and then around times of foreign terror attacks.

However, gun control works! The assault weapons ban that took place nationally in this country from 1994 to its expiration in 2004 indicated a decrease in gun massacres, as seen in this graph below. 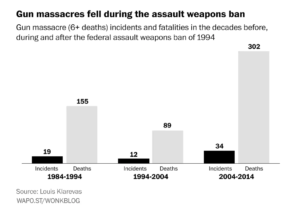 So where are the advocacy groups that fight for gun control? Believe it or not, they actually exist, just not nearly at the same magnitude as the NRA. Here are some:  Everytown for Gun Safety, Moms Demand Action, Americans for Responsible Solutions, and the Violence Policy Center. I believe these groups should consolidate and form one group that can garner collective support. One action celebrities, or other people with a platform can do is promote any of these gun control groups. Make them common household names, as is the NRA.

Young people, this is our time. Remember what I said about why the NRA is so effective? Its members don’t just care about guns in the time of a school shooting. The NRA has every single bill being voted on regarding gun control up on their website- exactly where, what room, when, what is being voted on, what side you should support  to promote gun rights- and their members consistently show up. It might be exasperating to most Americans, because as the latest Pew study shows, approximately 90 percent of Americans support common sense gun safety laws and background checks. But when it comes down to politicians actively debating those laws in their state legislature or nationally, the voices of the NRA show up. It’s not only the money that allows them to thrive, it is the group’s unprecedented support.

Here’s something I believe needs to be amended immediately, and is a good starting point. Did you know the CDC is prevented from studing gun violence and gets no federal funding to study guns as a mass public health crisis? This stems from a spending bill in 1996 called the Dickey Amendment. Even the author Jay Dickey regrets introducing the amendment. Call your representatives and ask them about the repeal of the Dickey amendment. Here’s Senator Kamala Harris’ number: (916) 448-2787.

So if you believe in stricter regulation of guns in this country, don’t let you passion die out! Call your senator/rep, make your voice heard, and participate in the National Day Against Gun Violence in Schools on April 20 at 10 a.m.