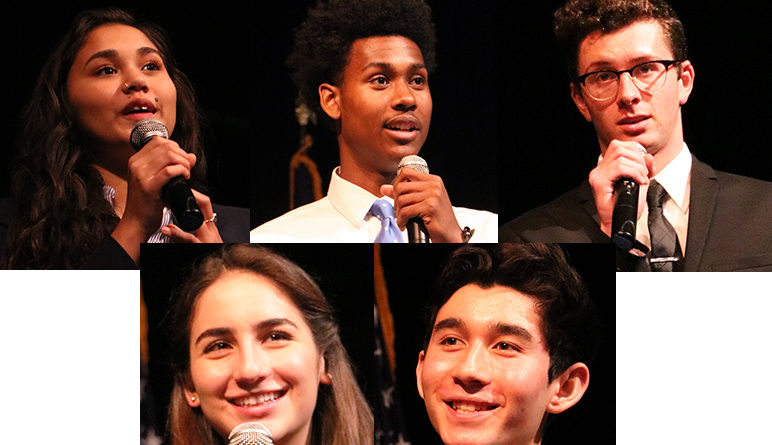 Students of CVHS made their voices heard and have elected their fellow students to Associated Student Body (ASB) and class office positions.

Michelle Terhell, the newly elected ASB president, already has high hopes for next year. “I plan to make next year as valuable and useful as possible. I hope to spread positivity throughout the campus and uplift the spirits of the students at CVHS,” she said.

Running unopposed, sophomore Devin Green was elected to be next year’s ASB vice president. Despite being younger than the other ASB officers, Green has had many years of leadership experience. “I have been an officer in leadership since sixth grade. I have been working to help better the school and my community the past few years through my involvement in school activities and community service,” he said.

Raina Naghieh, who also ran unopposed, was elected as the ASB secretary. Naghieh is ready to apply what she learned this current year in leadership to helping the school as secretary. “This past year I worked alongside (Co-Environmental Affairs Commissioner) Grace Boyd as your ASB environmental affairs commissioner, and I learned a lot about leading, working with adults and peers, managing my time, and meeting goals,” she said.

Andy Jerome, who was elected as the ASB treasurer, plans to use his experience — in and out of leadership — to improve the school for everyone. “I have a voice for everyone. I know what it’s like being the shy kid and I can really help people get out of their comfort zones,” said Jerome. “I am really passionate for my school.”

Alex Kwan will use his new position as ASB school board representative, his leadership experience, and his time spent working in the community to help represent all students at CVHS. “For the past five years I have worked directly with refugees and the homeless community in an effort to better their living situations. Talking with and understanding the needs of underrepresented people allows me to better represent CVHS’s diverse student body,” he said.

Senior class officers are Nicolette Paredes as president, Chloe Dionisio as vice president, Katelyn Wong as secretary, and Katie Tam as treasurer. Paredes, who has served in leadership at CVHS since her freshman year, hopes to make next year as fun as possible for seniors at CVHS. “My goal is to unite my class and get as many people to participate and enjoy the events highschool has to offer,” she said.

Junior class officers include Darsh Grewal as president, Kalei Stambaugh as vice president, Anmol Gill as secretary, and Tommy Ryken as treasurer. Grewal has much experience not only in leadership, but also in other extracurricular activities. “Other than being in leadership as a class officer for the past two years, I am also an officer for two clubs, and love making a difference at our school,” Grewal said.

Sophomore class officers include Nadine Ratinho as president, Miguel Bernas as vice president, Rachel Chin as secretary, and Alex Ikuma as treasurer. Ratinho plans on using her experiences from middle school and this year as a ninth grader to help her lead the sophomore class next year. “As a middle school student I was involved with our school a lot just like I am this year at CVHS,” said Ratinho.