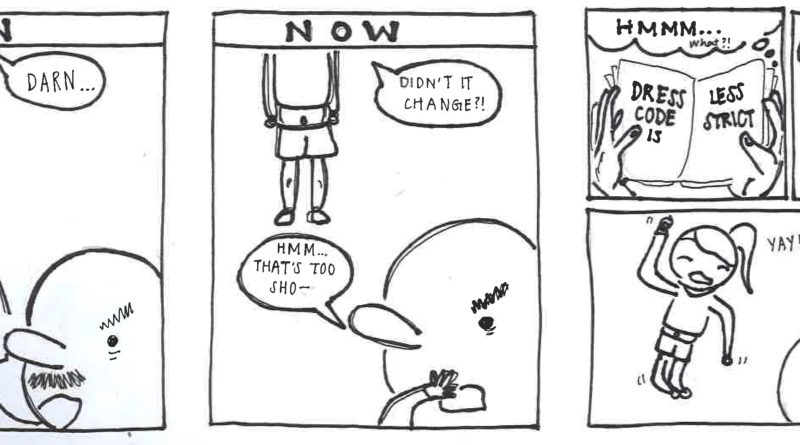 With the new school year also came a new Castro Valley High School student handbook. This year, CVHS administration has announced a more relaxed, yet problematic, dress code that seems remarkably vague in detail, and allows staff more power in deciding what is inappropriate to wear.

However, the change in the dress code for the 2017-18 school year shows that the administration is trying to adjust to the our concerns about the strict, unnecessary dress code. While The Olympian agrees with the new dress code changes, we think that the code needs to be more specific so that the rules are more clear to the students.

The change to the dress code is not necessarily in favor of the students. The CVHS handbook prohibits clothing “that overtly or inappropriately exposes a student’s body.”

How are students supposed to follow such a vague statement? This could allow teachers and staff to be able to call students out for wearing anything. Confusion over this is bound to cause conflict between the students and staff.

How are students supposed to focus at school when they are interrupted and embarrassed by being called out for what they wear? Teenagers are already insecure enough, they do not need teachers and staff nitpicking every article of clothing they are wearing, and they sure do not need to lose time from the enforcement of useless rules.

This is especially wrong since it is usually targeted at girls.Why is it that when a female students exposes her midriff at school she is forced to cover up, however when a male student wears no shirt during homecoming no action is taken?

Another issue that was not mentioned in the new dress code was Confederate flags. In years past, the dress code used to include a statement restricting wearing this racist symbol. The code states that clothing that cannot be worn,“includes offensive symbols used to intimidate or harass or includes hate messages or promotes violence such as guns or weapons,” which could include rebel flags.  Especially in a political climate like this, the administration should specify so there’s no dispute.

The Olympian believes that this vague dress code will not help the educational process at CVHS. The more relaxed rules are an improvement, but students need more specifics so issues between students and staff interpretation of the rules will not arise.