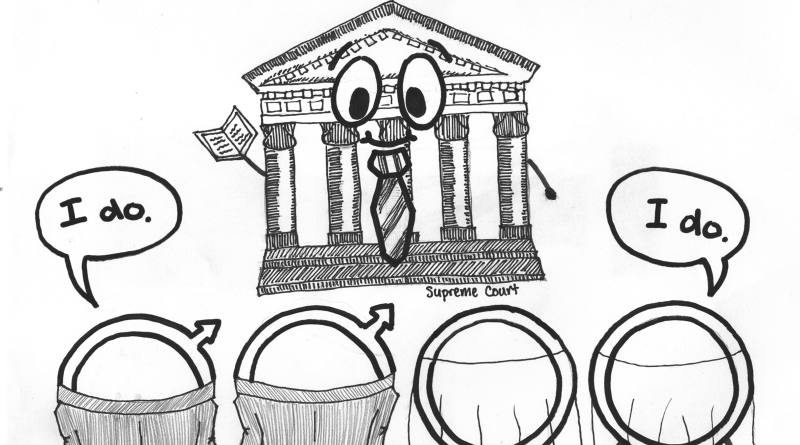 The Supreme Court ruled 5-4 in favor of nationwide gay marriage in the historic Obergefell v. Hodges case on June 25. The justices agreed that the protections of the Fourteenth Amendment extend to the marriage of two people of the same gender, guaranteeing that their unions would be valid in all 50 states.

We at The Olympian give our full and complete support to this ruling. The struggle faced by gay individuals has lasted too long, and while the case may not end their troubles, their right to marriage is now rightfully fulfilled.

The notion that homosexuals are unequal in our society is outdated; in a nation that claims to be so progressive, it was about time that we began to acknowledge the equal rights of every American. Prior to the June ruling, over 20 other countries had legalized same sex marriage; the United States was long overdue in joining those ranks.

We find it surprising that there was so much debate surrounding the issue. The right to love should be guaranteed to all, so it is only fair that marriage, which solidifies this union, be made available to anyone who pursues it.

This landmark decision isn’t the end of the road. There is still a long way to truly reach equal status for the LBGTQ+ community, and we should be continuing to make monumental steps to be more inclusive of them, both legally and socially. While gender fluidity and non traditional sexual orientations are becoming more common, being heterosexual is still considered the norm, and deviations from it are not always positively received.

The Supreme Court’s ruling has been met with outrage from gay marriage opposition. The most common concern is question of religious freedom: Is it fair for us to expect people to defy their personal beliefs to uphold the law?

While the moral implications may differ from person to person, we believe that it is the righteous thing to do in supporting these individuals. While someone may not personally agree with the notion of homosexuality, they have no right to discriminate against the LBGTQ+ community.

The act of denying service to a gay individual relies on the same fundamental principle as gender or racial discrimination, that there is a “superior” type of person that deserves preferential treatment. Our society has been pushing for women and minority rights for decades, it is only right to include LBGTQ+ to the the new age civil rights movement.

At the end of the day, we are all humans and share the same feeling of love. Whether it be between a man and a woman, two men, or two women, the commonality of our ability to care for others supersedes all of our differences. We should be extending our hands to support one another, rather than pushing each other back into states of oppression.