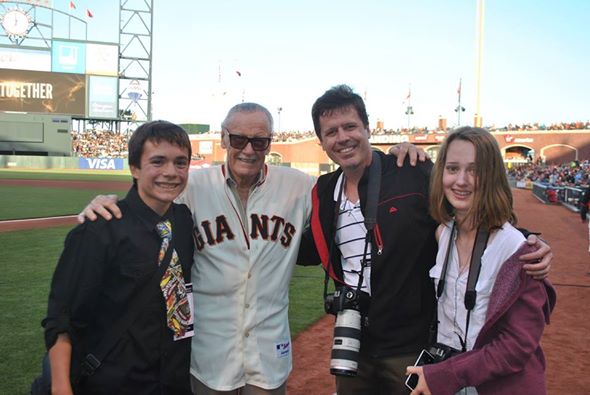 Have you ever had one of your dreams come true? Several of mine did on Saturday, June 7, 2014, or as I like to call it, the day I met Stan Lee at a San Francisco Giants game.

It started about three months ago when my teacher told me Lee was doing a special event at the game and he wanted me to cover it. Being the huge comic fan and aspiring comic writer that I am, of course I agreed to go. My teacher had told me we might get to meet him but wasn’t sure if we actually would.

So June 7 finally came and I was so pumped that I would not only get to watch my favorite team play baseball from the press box, but I would get to see my favorite writer do a question and answer session with fans. The whole day passed by slowly like a snail, and when the afternoon finally came around, I was so nervous and excited.

At the game we waited for what seemed like hours for Lee. We were hoping to get a quick interview with “The Man” before the event but he didn’t show up early. Then my teacher came up with the brilliant idea of me standing in the crowd of people waiting to meet him. And to put it lightly, it was hell. People were pushing and shoving and when Lee finally did come out it was even crazier. Not only was it Stan Lee on stage, but Michael Rooker, the actor known for his portrayal of Mearl in “Walking Dead,” was there because of his role in the next Marvel film, “Guardians of the Galaxy.” The crowd went from crazy to wild and I was in the middle of it.

During the Q and A session, Lee was asked many different questions, including “Who is your favorite character you created?”

“My daughter is my favorite thing that I created; but if I had to choose one of my characters, it would have to be the Amazing Spider-Man!” said Lee as he jumped proudly in the air.

After the interview we went onto the field to see Lee throw the first pitch of the game and hopefully to get a word with him. While waiting we explored the Giants dugout and met Giants pitcher Jeremy Affeldt.

And then that’s when it happened. Stan Lee walked right up in front of us and we spoke to him. It felt like the world around me had frozen and at that moment I was invincible. I was getting to talk with my hero Stan “The Man” Lee. He said he liked my tie, which featured Marvel Comics characters, and that he would look for me at Comic Con. I was on cloud nine the rest of the night. To top it all off, the Giants came from behind to beat the New York Mets with a ninth inning rally.

June 7 was one of the best nights of my life and I have my journalism teacher Matt Johanson to thank for that.