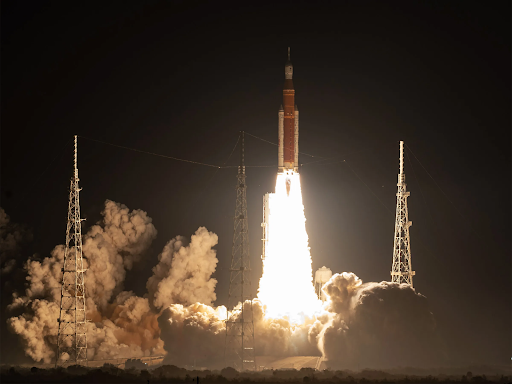 On Nov. 15, 2022, the first leg of NASA’s Artemis program began with the launch of Artemis I. After undergoing its fourth postponement and multiple delays, the rocket took to the skies with a combined total of over eight million pounds of thrust, making it the most powerful rocket ever launched. Artemis I has set world records as it tests the capabilities of technology that will lay the foundation for a permanent human presence on the Moon and beyond.

Artemis I is the first part of NASA’s mission to set a base of operations on the Moon. The test flight mission mainly tests Orion, a new exploration spacecraft capable of supporting a small crew. The rocket launching this spacecraft is the Space Launch System (SLS), a single-use rocket that NASA began developing in 2011. Although the mission is meant to certify the abilities of Orion and the SLS for future crewed flights such as Artemis II, the mission has also broken the world record of the furthest traveling human-rated spacecraft, beating Apollo 13’s fifty-year record by over 10,000 miles.

Going back to the moon is very exciting news for many.

“I think it’s incredible how we can witness this program in real-time. It’s also awesome how we will have a moon base and even a space station for the moon. It’s just so inspiring and I can’t wait to see the rest of the missions take place,” says sophomore Maxim Boychuk.

Artemis I will set the foundation for Artemis II in May 2024. Artemis II will be the first crewed flight to the Moon since the Apollo program over fifty years ago. The Artemis II mission is meant to evaluate the life support abilities of Orion using a crew of four astronauts.

Following Artemis II will be the Artemis III mission in 2025 where a small crew will spend a week on the Moon, conducting experiments and observations along with taking samples. Prior to the arrival of the crew, equipment will be placed on the Moon, such as a lunar rover. A lunar lander, the Starship Human Landing System (HLS) developed by SpaceX will also be pre-positioned in orbit so a crewed Orion spacecraft can meet with it. A portion of the crew will transfer from the spacecraft to the lunar lander and then land on the Moon to conduct their operations.

The Artemis program began in 2017 after years of development of the necessary technology. It is a massive program that has cost billions of dollars and called for the collaboration of space agencies, both private and international, such as SpaceX and the European Space Agency. Although incredibly costly in both money and effort, the Artemis program will set the stage for future human exploration of space. As NASA puts it, “Going back to the Moon will be the shining moment of our generation. This moment will belong to all of us: the Artemis Generation. Are you ready?”