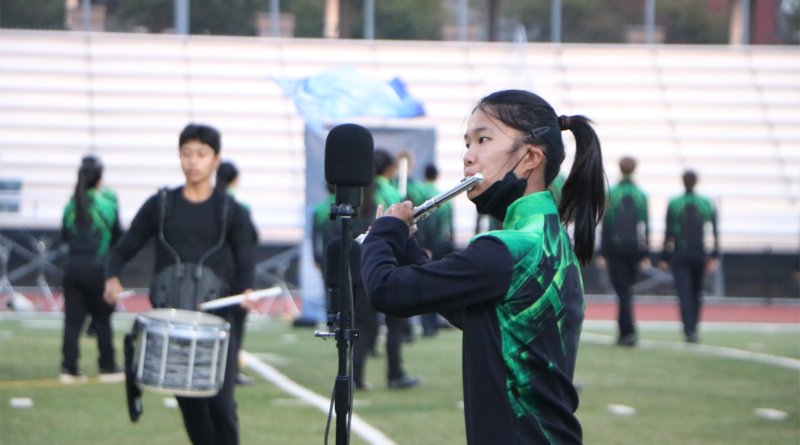 Before starting my first real marching season in sophomore year, my answer to the question: “Is marching band a sport?” would have been the same as that of most of my peers—no. After all, why should a group of walking musicians who play during football game halftimes be considered athletes?

But after nearly two seasons of the activity, with its Tuesday night and full-day Saturday rehearsals, through tiring heat and drizzling rain, the answer is now a clear and resounding yes.

A sport is defined as a competitive activity that requires skill and physical exertion. Marching band—whose members include wind players, percussion, and color guard—fulfills all these conditions, yet it is overlooked far too often by many other students as trivial, recreational, and offering little more than mere entertainment value.

Every season, stretching from August to November, the CVHS marching band works to prepare a new, themed show. For each set of the show, we must play our musical part, memorize visual directions, and hit our “dot,” or x-y field coordinate, all while carrying props or instruments sometimes weighing tens of pounds and marching with proper technique. Our three-movement 2022 show, “Ripple Effect,” lasts around seven minutes and includes over 50 sets.

Developing the skills and endurance necessary to succeed in marching band requires hours of drill and repetition. We rehearse at least 11 hours a week during the fall season—on par with many other sports schedules—not to mention an entire week of summer dedicated to band camp. Each practice starts with more than an hour of physical training, including running, movement, and core exercises, with a specific focus on dance for color guard.

The competitive aspect of marching band is certainly there as well. We attend competitions in the latter half of our season at various sites, including Independence High School in San Jose and James Logan in Union City. There, dozens of marching bands from around the Bay Area and state converge to display their passion for marching and fruits of their months of labor in show performances for audience-packed bleachers. Competition days are long and exhausting, beginning with morning rehearsal and ending with unloading trucks back at CVHS, sometimes past midnight. But competitions are also settings of school pride and friendly rivalry, of camaraderie and fun.

Indeed, from the karaoke on hour-long bus rides, to dinner and sharing snacks, to inside jokes on the field, marching band is fun. It’s also incredibly fulfilling. For marching band students, improving each performance of our show fills us with a similar pride and joy to that of a swimmer or runner beating their personal record.

We must stop minimizing marching band, both in CVHS and beyond. Marching band is more than just an entertaining pastime; it is a performing art and sport. It is deeply impactful to the lives and identities of the students who pour hundreds of hours into it over their high school careers. And most importantly, it is the source of many of my closest friendships—a community akin to a home.

3 thoughts on “Marching band is a sport”