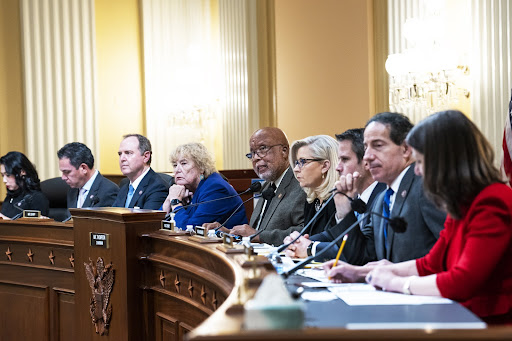 The Jan. 6 Committee ended with a bombshell at the end of their ninth hearing on Oct. 13. The bombshell? They will subpoena former president Donald Trump, ordering him to testify in court.

“A subpoena is a court order to testify on a given matter,” described Cassidy. On Nov. 12, Trump sued the January 6 committee to avoid the subpoena.

Liz Cheney, House representative for the state of Wyoming and Vice Chair of the committee, motioned the final vote: “I am offering this resolution that the committee direct the chairman to issue a subpoena for relevant documents and testimony under oath from Donald John Trump in connection with the January 6th attack on the United States Capitol.”

The committee then unanimously decided to subpoena Trump, formalizing the action with a 9-0 vote.

The vote to subpoena came after an FBI raid of Trump’s Florida estate, Mar-a-Lago, found that the former president took and hid classified White House documents.

In addition, the most recent, Oct. 13, hearing revealed statements made by former Trump associate, Roger Stone, before the election. Stone stated, before the election, that when the winner was still “up in the air…the key thing to do is claim victory.”

Despite doing what Stone had said and claiming that he won the election, the Jan. 6 Committee unveiled that Trump privately admitted he lost. The former president’s Communications Director, Alyssa Farah, remembered what the President said in the Oval Office while Fox News was playing in the background: “Can you believe I lost to this [expletive deleted] guy?”

All of this came on the precipice of a momentous midterm election in November, where multiple Republicans, including incumbent Colorado representative Lauren Boebert, have told Democrats to prepare for a “red wave.”

After being defeated in her state’s own primary debates, Cheney leaves one final anecdote to voters: “Nobody should be out advocating for the election of people who will not honor the sanctity of the election’s process. People who do that are putting politics ahead of the constitution and ahead of the country.”