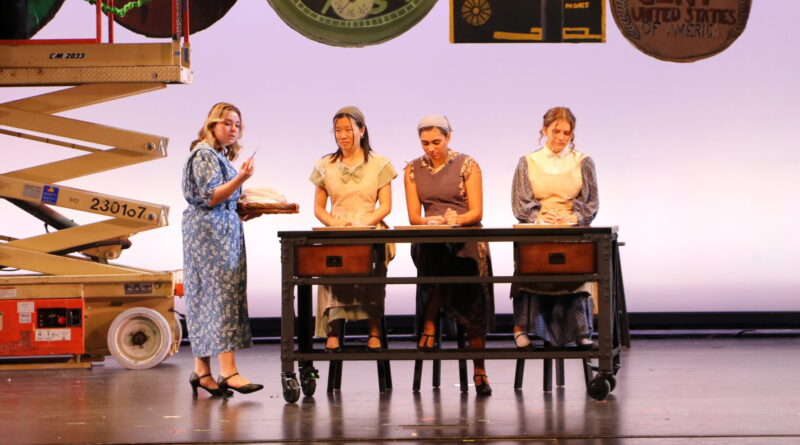 “In 1926, radium was a miracle cure… until the girls who painted them began to fall ill with a mysterious disease. Inspired by a true story, Radium Girls traces the efforts of Grace Fryer, a dial painter, as she fights for her day in court. Her chief adversary is her former employer, Arthur Roeder, an idealistic man who cannot bring himself to believe that the same element that shrinks tumors could have anything to do with the terrifying rash of illnesses among his employees…Radium Girls offers a wry, unflinching look at the peculiarly American obsessions with health, wealth, and the commercialization of science” (Castro Valley Center for the Arts – Events, n.d.).

When we last saw the cast they were just nervous auditionees, but throughout rehearsals, they have grown into fully-fledged performers. Starting rehearsals on Sep. 19, the cast practiced five days a week over two-months.

Post-COVID, double-casting is something drama teacher Tiffany Daily has prioritized. “I’m really trying to get students and people back to live theater and remembering how cool in-person real-life experiences are.” The show had a Cast A that performed on Nov. 4 and Nov. 10 and a Cast B that performed on Nov. 5 and Nov. 12. Grace, the lead character, was played by senior Natalie Bennett (Cast A) and junior Sophia Pereira (Cast B).

Compared to other plays, Radium Girls is unique. Rather than a simple two-act structure, Radium Girls consists of 26 smaller scenes, giving the play a cinematic feel.

Nevertheless, being unique doesn’t come without its challenges, especially for the students.

“The rehearsal process, as any [does], had its ups and downs. From forgetting lines to changing blocking a week before we open, the show goes through a lot,” said Pereira.

“The difference between this show and the others is that there were people to look up to. Now I have to be the person people look up to,” said Bennett.

With all the time spent on rehearsals, both actresses had different views on the amount of schoolwork. Bennett found rehearsals and schoolwork manageable, “I have been grateful that I haven’t gotten a ton of homework this year, and all my teachers [understand] that the play takes a lot of work,” she said.

On the other hand, Pereira struggled with balancing rehearsals with schoolwork. “As a junior, my class load isn’t light, so my grades or my sleep suffer as a result.”

But, all that rehearsal paid off. While opening night didn’t come without its flaws the cast felt that they “performed really well, so that most people didn’t notice [the mistakes], it was smooth [and] it just flowed very well,” said junior Ethan Dinh, who played Tom, Grace’s fiance.

With Grace’s case coming to a close, theater students won’t have a break for long, as the spring musical, “Mean Girls,” was recently announced. Be on the lookout for spring musical auditions, to see who will be CVHS’s new queen bee.