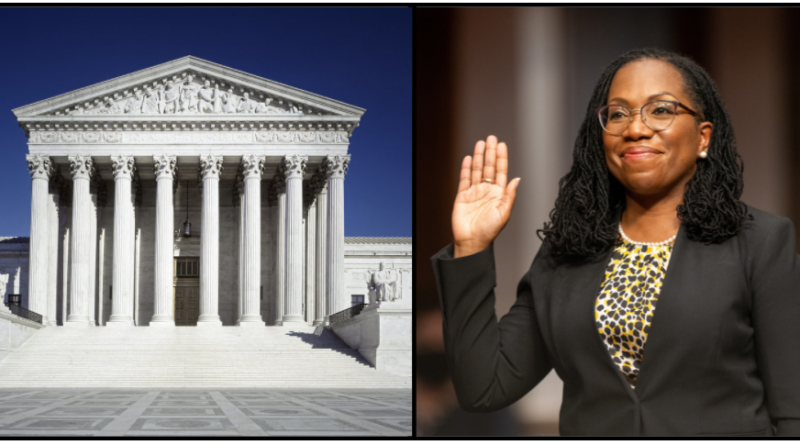 The Senate confirmed Ketanji Brown Jackson to the Supreme Court on Thursday, April 7 with a 53-47 vote. She is the first Black woman and third Black person to serve as justice.

Her nomination by President Biden followed Justice Stephen Breyer’s retirement announcement in January. Whether viewed by Democrats or Republicans, it’s undoubtable that Jackson is qualified; she studied law at Harvard, worked as a law clerk for three federal judges and then became one herself, served in the U.S. Court of Appeals, and is now the only current justice to have experience as a federal public defender and as a member of the U.S. Sentencing Commission. She will replace Breyer at the end of the Supreme Court’s term in July.

“I think [Ketanji Brown Jackson’s confirmation] is historic,” said government teacher Mark Mladinich. “She is highly qualified for the Supreme Court, which is fabulous. I think that we still have a long way to go, but it’s a step in the right direction.”

“I think as a symbol it’s really moving to see us be able to put a minority voice into the Supreme Court since it’s already very much lacking,” said senior Alaina Retodo.

Conservatives currently hold a 6-3 majority in the Court, so even after Jackson takes her place in July, the outcomes of upcoming cases will most likely favor the conservative viewpoint. Perhaps the most notable case is Dobbs v. Jackson Women’s Health Organization, which calls for the Court to overrule Roe v. Wade, the case from 1973 that ruled that abortions are a constitutional right.

Recently, Oklahoma banned all abortions within the state with a maximum penalty of 10 years in prison and a $100,000 fine; the only exception to the law comes if the woman’s life is critically endangered by her pregnancy. If Roe v. Wade were to be overturned, 18 states will likely immediately outlaw abortion, and states with existing restrictions will make them stricter. Most of these states are not expected to allow abortions to victims of rape or incest or to women whose pregnancies put them in danger of becoming disabled. The Court’s decision on the case will be announced in June.

Another noteworthy upcoming case is New York State Rifle & Pistol Association Inc. v. Bruen which brings the Second Amendment into play. The Court will rule on whether or not it is constitutional for a New York law to limit one’s ability to carry a concealed firearm. Currently, the law only allows gun owners to get a concealed-carry license if they can prove that they need the gun for self-defense purposes. It has been over a decade since the Court ruled on the Second Amendment; the last related case, McDonald v Chicago in 2010, established that an individual’s right to keep and bear arms applied to states as well as the federal government.

“The Court seems to be more in favor of gun rights, so there could be more concealed weapons on the streets of this country soon, which to me is a little alarming,” said Mladinich. “These cases could definitely change long-standing precedents in this country.”