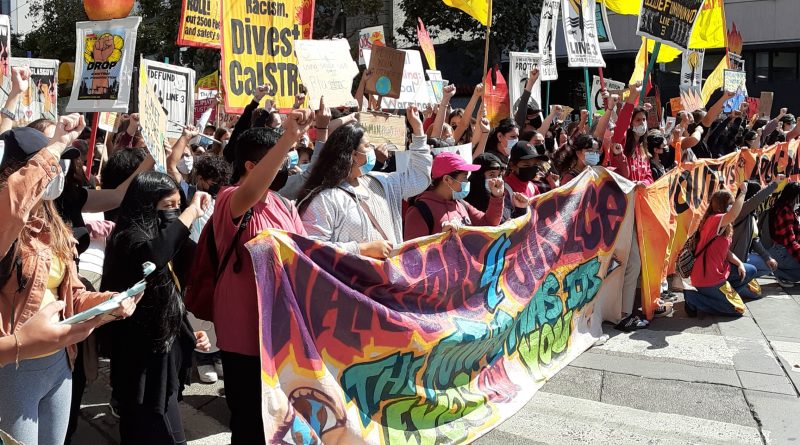 Hundreds of teenagers in red, orange, and yellow flooded the streets of San Francisco bearing ginormous signs and even bigger voices on Friday, Sept. 24, to protest the inaction of the government in regards to climate change.

A group called Youth Vs. Apocalypse put on this climate strike because members are mad at the government’s inaction toward the climate. Teenagers attended because they are not satisfied with the current conditions. Participants believe the government is allowing chaos, wildfires, and death.

The CVHS Activism Club attended the climate strike. Sixteen Castro Valley students took BART to San Francisco instead of attending school. The president of Activism Club, Sofia Palau, helped organize the strike: “When we strike, we’re saying that we will fight for our future.”

The event began at the Embarcadero Plaza, with a land acknowledgement taken one step further, to support Indigenous communities in the Bay Area.

During the strike, students marched two miles, pausing only to lie on the ground: demonstrating in front of Pelosi’s office and the Federal Building that they are letting people die through their inaction.

After marching, students sat in front of the San Francisco City Hall to hear from fellow marchers why this event mattered to them. One speaker said he marches for himself and his cousin, because they have asthma getting worse because of the worsening climate conditions.

“They claim to care, but they don’t; all they care about is putting money into their pockets. It’s time for people in power to get off their butts and start changing lives,” CVHS junior Natalie Bennett reminded the crowd.

Not only did this happen in the San Francisco Bay Area, this occurred all over the world, as it was the international day of climate action. Now, the world has a choice: will they listen?