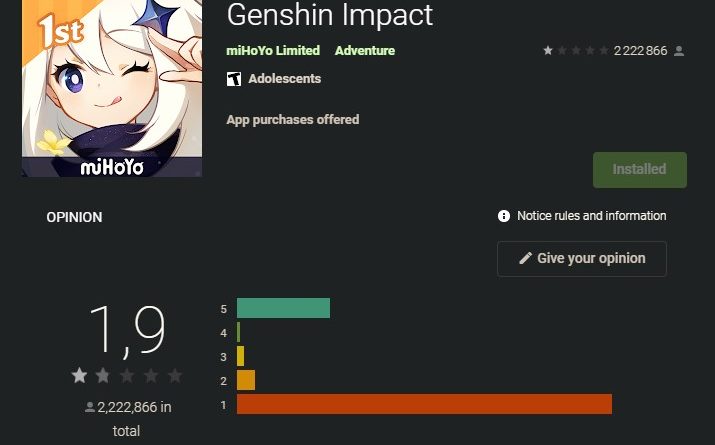 Players of the multi-platform game “Genshin Impact” overwhelmingly voiced their anger over its first anniversary. The majority of this rage started on Sept. 28 and died down within two days.

Mihoyo’s hit game, “Genshin Impact” gathered the attention of the gaming world when it first came out on Sept. 28, 2020. It combines open-world exploration with a gacha system for obtaining characters, as well as the unique feature of elemental reactions.

The gacha, or wishing, system, has been the subject of ridicule for months. It is one of the only ways of obtaining characters, costing fates which in turn, cost 160 primogems each. The only reliable sources of primogems are from daily commissions that award 60 per day and events that award varying amounts. It costs 90 fates to obtain a guaranteed five-star character or weapon.

Leading up to the anniversary, players were hopeful over rewards. One popular idea was a choose-your-own-five-star-character, which had been done once with a select few four-star characters.

“Mihoyo could at least give one five-star,” said senior Skyler Chan, who quit “Genshin Impact” in August after failing to get his desired limited-time character.

One of the sparks of the outrage was an art contest hosted by the official “Genshin Impact” forum, in which the winners’ artwork would be used for the game’s anniversary. However, only a small portion of participants would win 100 primogems each, not enough for a single fate. In response, angry players flooded submissions with low-quality artwork.

Disappointed players threatened to move to other games while others mass disliked “Genshin Impact” videos on YouTube.

“It made me realize how much more fun Xbox 360 games were, especially ‘Assassin’s Creed,’” said sophomore Lilith Castaneda, a “Genshin Impact” player with second thoughts.

Mihoyo’s lack of a proper announcement on anniversary day only fed the flames. Disgruntled players felt its disconnect to the player base and hoped for at least an acknowledgement. Instead of addressing this frustration, Mihoyo censored complaints on its social media platforms.

Facing additional censorship, the “Genshin Impact” community resorted to targeting Mihoyo as a whole, leaving one-star reviews on Mihoyo’s other games such as “Honkai Impact 3rd,” which got other communities involved. However, the “Genshin Impact ” community was to bring out its worst by attacking other gacha games with one-star reviews complaining about “Genshin Impact’s” anniversary rewards. Non-gacha games were also attacked, such as “Roblox” and “Clash of Clans,” as well as Google Classroom.

The community has split over whether some took it too far by attacking non-Mihoyo games. Others felt justified in distancing themselves from “Genshin Impact” as a whole.

Mihoyo finally responded by giving out 1600 primogems and 10 fates in-game plus various items, which were met with reluctant acceptance. Bitterness grew when players found out one of the items was meant to be sold in the shop at a later date. The “Genshin Impact” marketing team was simply protecting itself by giving out the rewards as concessions.

“The rewards were underwhelming, however, I think the real issue is that the fixes and patches did not address what the players wanted,” said senior Robin Mendoza, a current “Genshin Impact” player.

In the aftermath of the chaos, “Genshin Impact’s” first anniversary will definitely be one to remember.

2 thoughts on “‘Genshin Impact’ has a disastrous first anniversary”