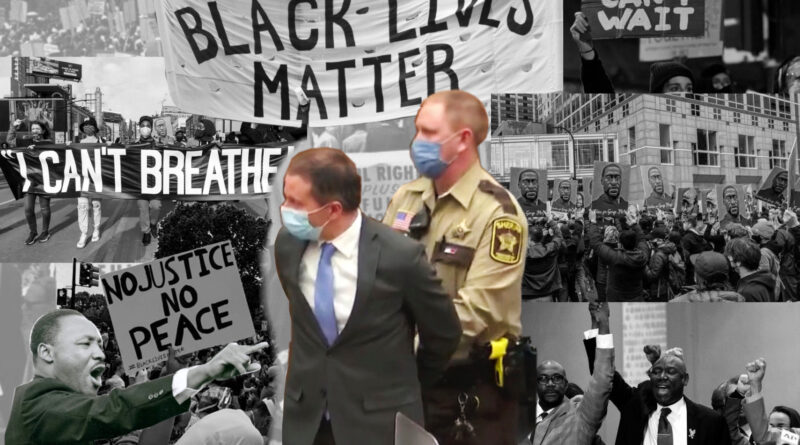 Floyd died after Chauvin pressed his knee on Floyd’s neck, face down and handcuffed, for nine minutes and 29 seconds.

Trojans expressed hope and relief as Chauvin’s verdict was announced on April 20.

”My takeaway from the trial is that we do as a country have the room and the capability for change and human decency. You tend to forget all the good people out in the world, when the only ones being highlighted are bad. This showed me that we are moving in the right direction as a society, and as a nation,” said junior Brieaun Patton, Black Student Union president.

“Though it took a while, I think Chauvin got what he deserved. His verdict is a rare example of police being held accountable, a warning to other officers that there will be repercussions for acting with unnecessary force,” said senior Sonia Andrade. “While it is a step in the right direction, it’s important to note that this is not justice and that there’s still a long way to go in the fight for civil rights. I now hope to see our government make changes in the law to counter racism, as it is rooted in our institutions.”

Sophomore Kori Lowe expresses similar views: “I think that this verdict shows how the police are not above the law, and they are still entitled to the same treatment as everyone else.”

The world was changed forever through the video recorded by Darnella Frazier as she witnessed Chauvin put his knee on Floyd’s neck. Through Frazier’s video recording, Floyd’s death ignited protests nationwide on police brutality and racism.

“I believe that the presence of technology played a large role in the obvious guilty charge against Chauvin. Without the cell phone, atrocities committed by police and individuals in American society would be more difficult to prove in court, therefore making justice and accountability scarce,” said junior Michael Karapetyan.

“I think it’s a good step towards solving systemic racism and over incarceration of blacks, but the problem is still present and won’t go away just with this one case,” said junior Nolan Slader.

During the trial, Chauvin invoked his Fifth Amendment right to not testify. While his actions led to protests around the world, the public has heard very little from him.

Chauvin is in jail pending his sentencing in June.

“America’s justice system has failed the black community countless times,” said Wandi Muinde, ASB secretary. “We might’ve won George Floyd’s case, but there are hundreds of other cases of POC murder or abuse victims because of police brutality and aggressive law enforcement.”

3 thoughts on “Chauvin convicted: “a step in the right direction””