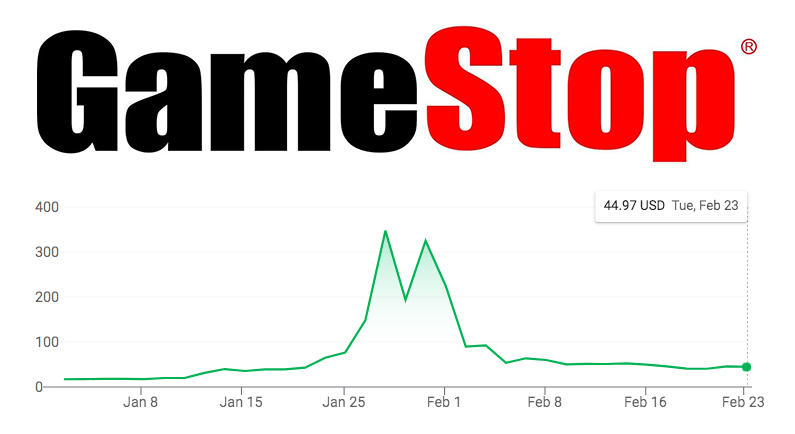 Millions of amateur investors lost their funds as GameStop stock plummeted. After an unprecedented boom in the value of GameStop stock created by a flock of investors, the synthesized increase in value is finally crashing as many predicted.

A junior at CVHS learned this lesson the hard way when he lost funds investing in the stock. “When I bought at around $250 I thought that the value was going to rise back up to $400. I didn’t realize the stock was dropping so much… I bought two shares and ended up losing over $200 before selling,” he said.

Despite this dip in value many investors are “holding the line” stating that even though they are losing many of their funds they will continue to try and artificially raise the value in an attempt to take billions from giant hedge fund companies who shorted GameStop stock.

The fiasco began when Redditors, people who collaborated on the Reddit social media site, decided to take revenge on hedge funds which shorted GameStop stock, essentially profiting off of GameStop’s loss. Redditors artificially boosted the price of GameStop stock so that these hedge funds would lose billions of dollars.

After boosting the stock up to an astounding $350 per share and bankrupting multiple hedge funds, Robinhood, a stock trading app, blocked access to sell GameStop stock in unlimited amounts, essentially stopping the rising value of GameStop stock. Ever since Robinhood halted trading of the stock, the price of GameStop stock has been plummeting slowly and is currently only a fraction of what it used to be at around $50.

Despite this dip, many Redditors are keeping their stock, uniting together to squeeze as much money as they can from these giant hedge funds which they claim have been manipulating the market long before them.

“I don’t care about the money anymore, I’m going to hold for the cause.” To many of these investors it is no longer about profit, it is about sending a message, and the goal is now to zap as much funds as they can from the wealthy,” said Reddit user u/iimorbiid.

Despite the dedication of the cause, many investors are struggling with their losses and are in economic ruin. Due to the news surrounding the success of GameStop stock, many blindly invested in order to get rich as quickly as possible, leaving many burned with their savings in ashes.

“GameStop stock was way overvalued,” said Economics teacher David Roth-Rossi. “You have to remember when someone gains a million dollars someone else loses it…Many people are going to lose a lot of money in this stock, better to diversify your portfolio.”

Despite the fact that many investors have lost gigantic chunks of their wealth, many are proud of their ability to organize and lead a charge against the wealthy. In a time where nearly everyone has had to grapple with the reality that their lives will never be the same after the pandemic, small moments of unity and silliness such as this GameStop fiasco are helping the community stay connected.