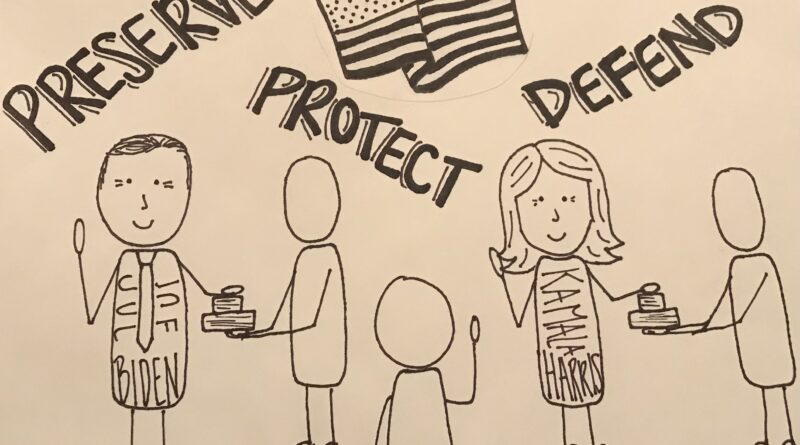 “I’m looking forward to seeing how the President will unite the country together,” said junior Ashley Huang.

“President Biden’s speech was very liberating and powerful. It made me think that our nation can be restored,” said freshman Sofie Peltola.

“He’s big on unity, which I think is the key aspect of his speech. It’s admirable how he keeps advocating peace in such a divided political atmosphere,“ said junior Leo Chu.

“Biden’s win is very exciting and great for our country, but the fight to make America a loving, accepting place, like he said in his speech, isn’t over. We still have much more to do, but Biden’s victory is a step in the right direction,” said junior Ella Koch.

“Well I appreciate the fact that he said that he would fight for all Americans. It didn’t matter to him if they supported him or if they didn’t support him. He said that he would fight just as hard for both parties. I think that this is what defines a great president in the sense that a great president does not hold prejudice or grudges against anyone,” said junior Justin Audong.

“I appreciate how Biden addressed that we, as a nation, still have far to go and much to repair and restore. Biden recognizing the great changes that still need to be made is really crucial and hopefully foreshadows his presidency. I feel that Biden’s willingness to make necessary changes already demonstrates a large difference from Trump’s presidency,” said junior Honna Nguyen.

“I feel that Biden’s speech actually had a purpose, he wants us to be one and unite. He will put his everything into helping everyone, and not just his supporters,” said junior Jessica Sage.

“Honestly at this point, I’m a little done with messages of unity, as I think respectfully disagreeing isn’t really applicable to when human rights are in question. But, I think that that’s the appeal of Biden for a lot of people, and it’s so much better than anything Trump could ever say,” says junior Brooke Kasl Godley.

“I’m glad to have Trump out of the White House because I don’t think that he was fit to be president. I think Joe Biden is a better president for our country and has the opportunity to create change,” says senior Lindsey Gard.

“The most inspiring part of the inauguration was watching Vice President Kamala Harris being sworn in. I think it will definitely pave the way for more women and people of color to assume higher positions of power in the government,” said sophomore Katie Yin.

“President Biden’s emphasis on putting aside political differences and coming together as one nation is an important and powerful message following such a divisive election. It feels good to be able to watch history being made, as Kamala Harris becomes the first women to hold the office of vice president,” said history teacher Kara Wilkinson.