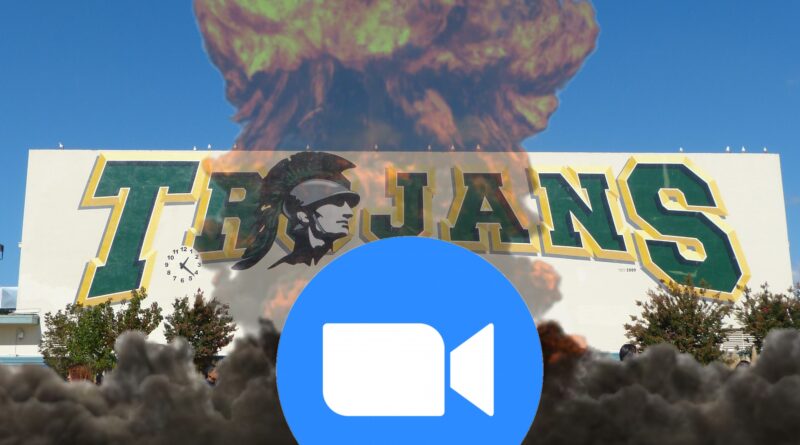 As CVHS transitioned into online learning, “zoom bombers” have taken advantage of the situation to disrupt classes and other school events. Zoombombing, which refers to the intrusion of online video meetings by internet trolls, was reported at the virtual Back to School Night and the Senior College Night, in addition to multiple classes.

“[Zoombombers] want to upset people. They know that using racist or sexist terminology and also a lot of sexual terminology can get people upset,” said Assistant Principal Kevin Baker.

Sexual noises, a racial slur and a student’s name were called out at an incident in a band class during the first week of school. Students, who were adjusting to their new online classes, expressed confusion and annoyance.

“I felt aggravated because it was making everyone uncomfortable and it was really disrespectful,” said junior Amaya Davis.

In a separate incident during a Python class, an attacker who went by the name of “iPhone” made sexual noises and played explicit music. Students tried to figure out who the zoombomber was by using the chat, and unmuted themselves to tell the attacker to stop.

“I let everybody in somewhat trustingly because it was the very first class, “ said CTE teacher Louis Stanley.

Some sessions at Back to School night were attacked as well. Many of the links were public to give parents access to the video meetings. Attackers took advantage of the dial in feature to remain anonymous yet gain access to the meetings.

“We had worked so hard to have this event and then we had to deal with this. I also felt embarrassed that this was being broadcasted for all students and families as well as guest speakers,” said counselor Allison Zuckerbrow.

With her quick thinking, she shut down the zoom meeting and restarted it without the Q&A feature. However, even through the disturbance, many students found College Night extremely helpful.

“Parents and students reported still learning a lot and enjoying the event despite what happened,” said Zuckerbrow.

After these incidents, teachers have increased the security of their meetings. Stanley has since limited his Zoom calls to only a specific list of participants and implemented a waiting room. Zoom also has features that allow teachers to remotely mute and remove zoombombers from a call.

Additionally, the district has been aiding teachers to prevent zoom bombings. Recently, it bought a special Zoom subscription that strengthens the security of the calls by only allowing students logged in with their school Gmail accounts to join. This does not apply to events in which the public is invited to, however it makes day to day classes safer.

Zoombombing has occurred in many school districts nearby and all around the country as well. It has also affected businesses and even a House Oversight Committee meeting.

Regardless of the event, zoombombing is extremely offensive to all involved and disrupts limited class times.

“Our teachers are working really hard to teach and when these things happen it prevents them from doing their work and it prevents our students from learning,” said Superintendent Parvin Ahmadi. “Each of us should be responsible and make sure we are not part of those actions.”