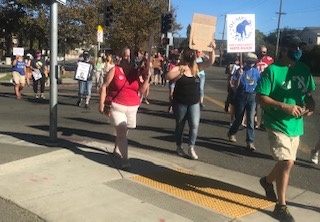 About 50 people met at CVHS, marched down Redwood Road, Castro Valley Boulevard, and looped back to CVHS on Saturday, Oct. 17. The marchers protested President Donald Trump’s nomination of Amy Coney Barrett as a Supreme Court justice.

Many of the protesters also advocated to stop Trump from being reelected, and supported the Democratic candidate, Joe Biden.

The crowd chanted “Respect her wishes,” referring to Ruth Bader Ginsburg’s wish to not nominate another Supreme Court justice until after the 2020 presidential election. Some people held up signs saying “DUMP TRUMP” and “Girls just wanna have fundamental rights.”

Cars honked and people cheered from their cars as they marched on the sidewalk. One woman held her ballot out of her window as she drove past the protesters. The public seemed to support the march.

Unlike the past protests, the participants were predominantly white and middle aged. The protesters remained peaceful as they marched on the sidewalk instead of blocking traffic by walking on the road.