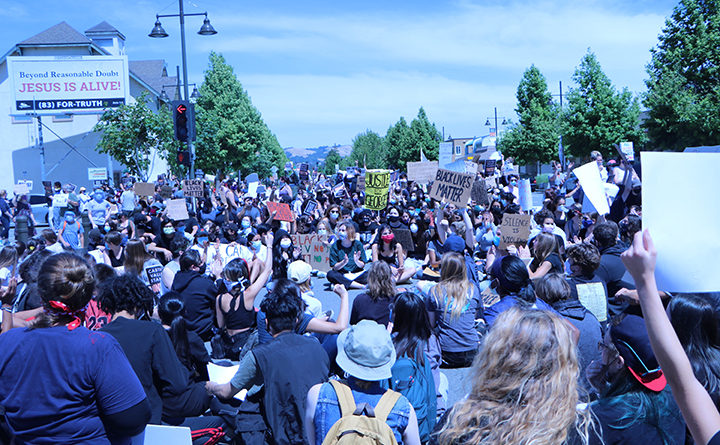 The nationwide Black Lives Matter movement is a historic event that has changed many perspectives, ideas, and societal norms. With the rise of social media, people started opening their eyes to the racial injustices that many citizens face in our country. Thousands of protests and petitions forced leaders of our nation to make difficult decisions to address racial tensions within our society.

CVHS students were quick to organize a protest and showcase their support, empathy, and togetherness among these unprecedented times. Starting from Castro Valley Boulevard and ending at Adobe Park, people of all ages marched together for this unifying event which took place on June 8 and lasted around two hours. Many CVHS students delivered great speeches at the protests.

Senior Aaron Ruiz was proud to see so many activists and allies come together. “There was a real feeling of solidarity and understanding among the diverse crowd,” he said.

Ruiz spoke about the “prevalence of police brutality” as well as how to become an active ally through staying informed about current events. He mentioned the deaths of Augie Gonzalez, Oscar Grant, and Emerald Black’s unborn baby.

“Castro Valley needs to keep its eyes and ears open to combat racism. People tend to distance themselves from these racial issues, telling themselves that police brutality is only a problem in other parts of the country. That is a fallacy that must be realized by everyone in Castro Valley and the Bay Area,” said Ruiz.

Ruiz encourages everyone to speak out against injustices they see in their community. “Stay informed and stay in what late civil rights icon John Lewis called “good trouble,” encouraged Ruiz.

Junior Wandii Muinde feels empowered and heard after speaking at the protest.

“During my speech there were a few cheers and at the end I chanted a few verses and they repeated; that very moment felt so raw and uplifting,” she said.

Munde spoke about police brutality and the endless acts of racism and discrimination African Americans have had to face.

“The BLM movement makes me feel that there is hope for my people in this country to have racial equality. Having more stories being revealed in the news about the hundreds of black people being murdered or wrongly persecuted has opened my eyes to the problems America has been trying to hide for generations,” Munde claimed.