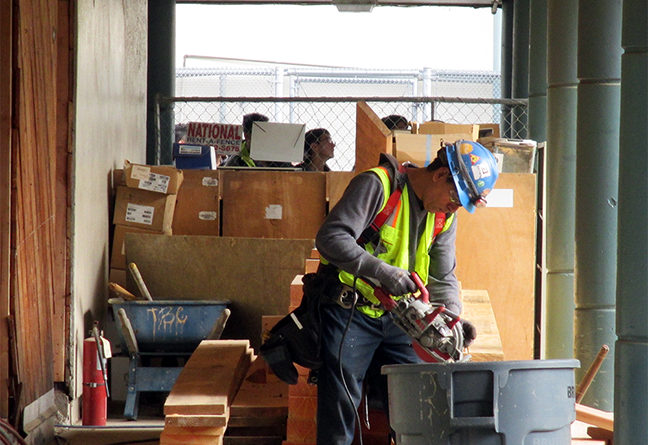 The construction on campus has already became very noticeable, but there will be even more changes during the summer and throughout the 2019-2020 school year that will catch your eyes again such as the renovation of 100 hall. These changes are exciting, but unfortunately they come at a price.

Limited parking, distracting noises, and crowded barriers throughout campus are just a few of the inconveniences from the construction that are going on right now. This is hard to avoid when doing construction and it will all be worth it in the end, but when will that be?

Just by taking a look at the sites, you might see that the construction has made progress in the 400 and 500 wings but still has a ways to go. Some of the rooms in 400 hall are still completely gutted out.

Many of the obstacles that the construction company has faced has actually been out of its control. Their first major setback occurred when the approval to start construction was delayed six months. Sharon Trieu-Quince, director of facilities construction for CVUSD, also mentioned that the along with the shifting economy, the price of construction workers during the summer increases due to a higher demand. This takes time out of construction because the district has to take a step back and re-budget the project.

Another unfortunate situation that made work a lot more difficult was the recent outbreak of wildfires throughout California. Many construction workers had to put aside their current projects to go build temporary shelters for the victims, along with fixing the destruction from the fires.

Other setbacks have included companies not delivering crucial equipment on time, and workers finding new problems that surface while performing construction. One of their recent discoveries is a layer of moisture underneath the ground of 500 hall, which means that they have to take some time to figure how to move on and then do more work than they had previously expected.

All of these setbacks delay construction time, but fortunately workers haven’t let it set them back too far.

“For the 400 and 500 buildings we project that finishing in the summer and we will move classes in August,” said Trieu-Quince.

There have also been upgrades to the security cameras and the fire detection and alarm system. Other improvements include a resurfacing of the track, brand new turf, temporary classrooms and bathrooms, and LED lighting upgrades with smart energy sensors.

Measure G has gained a lot of attention, but there’s also going to be more contstruction soon underway on Santa Maria Avenue. This is a separate project that is being done by the Alameda County Public Works Agency, which plans to renovate the street, create new sidewalks, and add bike lines.

Workers will be working on all of Santa Maria Avenue and will try to be thoughtful of release times from school when they are close to CVHS. Beginning in February, that the construction will be completed in about 12 months.