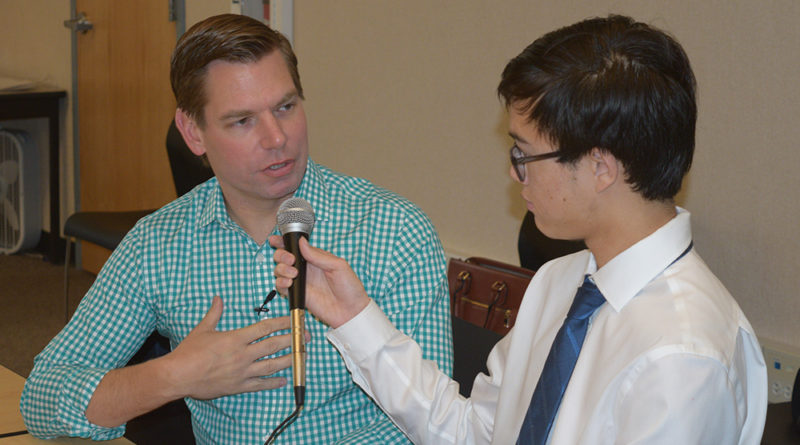 Congressman Eric Swalwell hosted a town hall meeting at Dublin High School on Dec. 1. His constituents had the opportunity to address him on a variety of issues in person.

“It’s always exciting to come back here… about a year ago, I delivered the Democratic response to President Trump on campus here, which was exciting, but now, the students here, they have a Congress that can actually address a lot of the issues that they care about,” Swalwell said.

The Olympian interviewed Swalwell shortly before the meeting began.

Olympian: How do you feel about the results of the midterm elections?

Swalwell: “The American people very loudly said they want a Congress that focuses on… putting a balance of power on abuses of power. They want us to collaborate where we can, they also want us to investigate where Republicans weren’t willing to and that’s what they can expect to see.”

Olympian: What will your greatest legislative priority be?

Swalwell: “Mine personally is going to be to advance the Protecting Our Democracy Act… It has bipartisan support right now but never got a vote under Speaker Ryan so we hope that we can in a nonpartisan way put experts on the task of looking at what happened, how we can prevent it from happening again, and securing our democracy.”

Swalwell: “I’d like to focus on the Russia investigation and fill in the gaps where we can, to bring in to the Judiciary Committee Acting Attorney General Matt Whitaker, to understand if he’s going to allow the Russia investigation under Special Counsel Mueller to continue, but I also want to look at where the President has cashed in on access to the Oval Office, by getting hold of his tax returns, looking at whether his financial interests are driving domestic and foreign policy, and intervening where we can, to protect the American worker.”

Olympian: What do you believe are our options for improving voting, in terms of reliability, technology, and access?

Swalwell: “I would like to see us have online voting, on your mobile device. I know after the Russian attack, people sometimes suggest we should dip our thumbs in ink and go back in time. I think we should see this as an opportunity to convene the best and brightest minds in digital security and come up with a way for us to [vote online]… make it more accessible, and get rid of a lot of the suppression that we’ve seen.

Olympian: If you were to run for president, what would be your plan to unite us as a country?

Swalwell: “Most of my life, whether it’s passing dessert at the Thanksgiving table or just seeing my in-laws, has meant talking to and working with Republicans; I passed bills as a minority member in Congress and got them signed by the President, because I had relationships with Republicans. This President has challenged all of us, but this country is going to need to heal. I think the next president is going to have to unite us. One way that I see that would be to put forward consensus items that Republicans and Democrats believe… I think the next president should put Republicans in the cabinet and show the American people that we’re going heal and climb out of this together. If I ran, and was elected, that’s something I’d do.”