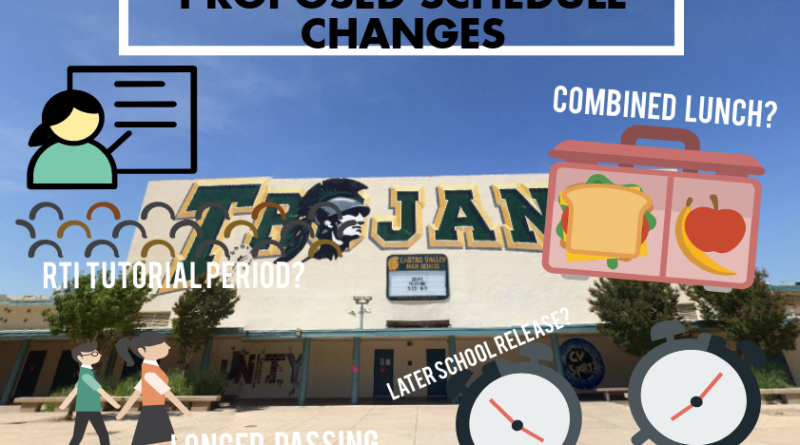 Waking up early for a 7:05 a.m. zero period class is tough on students and staff here at CVHS, and a new, proposed scheduling change would allow students to get more sleep.

“Research has shown that high schoolers’ brains start to function better at 9:00 – 10:00 a.m.,” said Assistant Principal Jesse Hansen. The administration here at CVHS is seriously considering this data. “We are trying to improve student performance and learning,” Hansen said.

In an effort to further organize the school day, administration would accompany the later start time with a combined lunch period. This will result in students having combined lunch not only on block days, but during traditional days as well. These lunch periods would be longer than traditional schedule lunches, much like block schedule lunches. A 40-minute lunch period would be accompanied by a ten-minute break, or a 35-minute lunch and 15-minute break.

“Later start times would give students more time to sleep, but it would also mean a later end time, cutting into our homework time and extracurricular activities, and I do not like the idea of combined lunch periods because it gets too crowded,” junior Sophia Chan said.

Due to new portable classrooms being added in the outfields here on campus, passing periods will be extended to seven minutes to allow for a longer transit for students to get to class on time.

Tuesdays and Wednesdays could be accompanied by a Response To Intervention (RTI) period. RTI periods will be used to help students with homework or classwork. These periods would last 35-45 minutes on block days, and attendance would be mandatory, whether students feel the need to seek help from teachers or not. This would not affect the length of the block day however, because to accommodate the long RTI period, each block period will be shortened 15 minutes or more.

“Activities would include college application workshops, guided study halls, and other electives during the RTI period,” Hansen said. These activities would allow students who do not need teacher assistance to have a place to spend their 35-45 minutes productively.

The administration plans to send polls about the proposed changes to teaches, students and parents in the coming months.