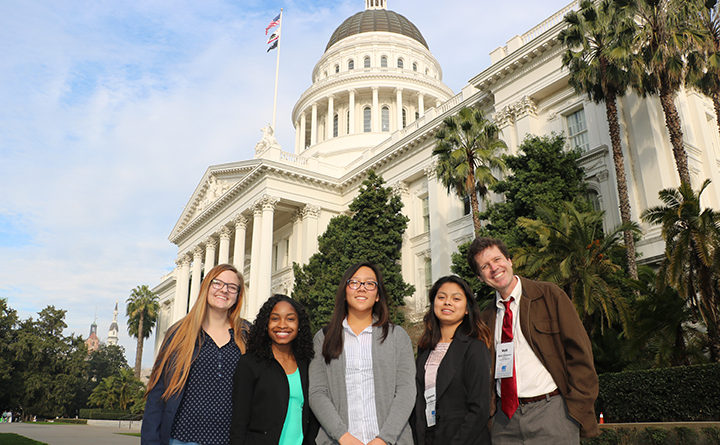 A common concern among the lawmakers interviewed was that President Trump would take actions that could endanger the values of this state.

“We are entering a phase where what have long been very obvious distinctions between California and the United States will become more clear and more glaring than ever before. It’s incumbent upon our state, our state leaders, our state citizens, and our state advocacy groups to make sure that they’re very vigilant, and that they’re protecting California values,” said Assembly Speaker Anthony Rendon, D-Los Angeles.

Specific issues that California lawmakers are worried about are health care, immigration, climate change, and our state’s economy.

“He is a very clear and present danger to the economic prosperity, to the values, and to the people of California. He’s threatened to undermine the Affordable Care Act, and as a result, you may have six to seven million people who have no health care. He’s threatened, and is already carrying out this threat, to separate mothers from their children with massive deportations of families,” said Senate President Kevin de León, D-Los Angeles.

“We’ve been the leader in climate change, so we have a green economy. We produce jobs; we’re sort of the highlight of the world on how you can grow your economy and reduce your greenhouse gases and live sustainably. He thinks [climate change] is a hoax from the Chinese,” added Senator Bob Wieckowski, D-East Bay.

Assemblyman Bill Quirk, D-East Bay, called Trump’s election “a disaster” for California, in agreement with his Democratic colleagues. “The difficulty we have right now is a president who is just all over the place,” Quirk said, expressing particular concern about immigration.

Our politicians are hoping to work together with the Trump administration to keep protecting Californians, just as they have worked with other presidents, but are ready to put up a fight if President Trump won’t cooperate.

“We get a lot of funding from the federal government, we depend on the federal government, so we would like to have a good working relationship with the Trump administration. But if things do not work out as well as we hope, then California is also prepared to fight and to defend the many rights and laws that we have passed here,” said Fiona Ma, member of the State Board of Equalization.

“We may be part of a lawsuit in the future to stop Trump from commandeering local resources, commandeering our police department, unwinding policies that make California a great state. He is a threat,” de León added.

California Republicans have a more positive outlook on Trump’s presidency. Their focus is on doing their jobs and collaborating with the federal government.

He’s going to be the president for the next four years, which means for us here in California to make sure that we do the job in front of us, to have a good relationship with the folks back in D.C.,” stated Assemblyman Chad Mayes, R-Yucca Valley.

The shared message between all politicians is that our legislators will do everything in their power to protect what California stands for.

“What I intend to do is protect the laws that we have, that have helped us be so vibrant, and I will do anything to fight any attacks that would hurt California,” said Attorney General Xavier Becerra, a Democrat.

With so many passionate and caring politicians, our state will surely stand strong against any federal actions jeopardizing our values.

“People in the community expect us to continue to be a beacon of light, part of the resistance,” Wieckowski declared.