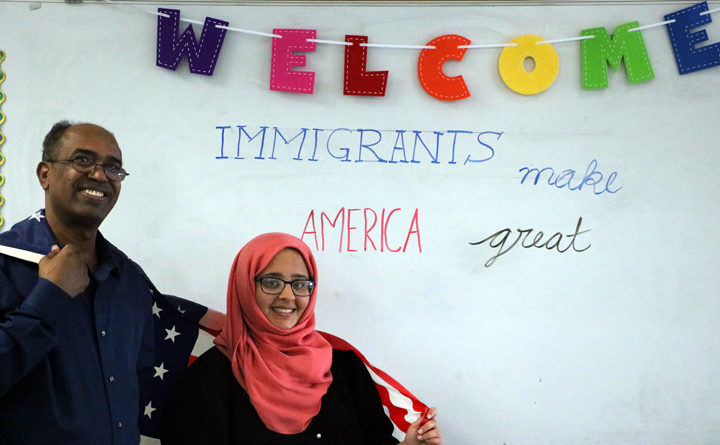 By Hannah Johansson and Ria Panjwani

President Trump’s executive order banning travel from seven Muslim-majority nations has created a climate of chaotic fear for many U.S. immigrants. Though currently blocked because of the recent Ninth Court of Appeals decision, the ban still makes CVHS community members anxious about what could happen to them and their families.

Senior Sara Abdulqawi and her family arrived in the United States from Yemen about four years ago. Abdulqawi wishes Trump would realize that not all Muslim immigrants are threats to national security.
“We all came from somewhere,” said Abdulqawi, pointing out the fact that Melania Trump herself is an immigrant.

Because of Trump’s attempted travel ban which he said will promote national security, Abdulqawi and her family have been forced to alter their summer plans. Despite the fact that her entire family has green cards, traveling is dangerous. They are afraid they might not be able to re-enter the United States.

“We wanted to visit our family in Yemen for a month in the summer, but then my dad said no. He cancelled everything,” said Abdulqawi. “I feel sad, because I was planning to go there and see my friends, my family, everyone.”

The trip would have been the first time the Abdulqawi family had been back to Yemen to visit family and friends since they left.

Abdulqawi is not the only CVHS community member affected by the ban. Math teacher Sharafeldin Musa is an immigrant from Sudan. Musa holds dual citizenship in Sudan and the United States.

“That was a shock for us all. It hit us, hard,” said Musa about Trump’s order. “My father-in-law and my sister-in-law had an interview to get a visa to come to U.S. just two or three days before this travel ban was imposed on Sudan. They were very disappointed when they got an email from the embassy in Sudan cancelling the appointment for the time being.”

Not just immigrants condemn the attempted ban. Even Republican leaders who generally submit to Trump’s political ideals, such as Senators John McCain and Lindsey Graham, have expressed their concerns.

“We fear this executive order will become a self-inflicted wound in the fight against terrorism,” said McCain.

Widespread opposition against the travel ban gives many immigrants, including Musa, hope for the future of United States immigrants.

“This is the country of law,” he said. “No individual can wake up in the morning and try to come up with a law or rule breaking the Constitution. I am very optimistic that the rights of immigrants will be protected by the Constitution.”

To ease some confusion and panic, Castro Valley Unified School District held a meeting on Feb. 8 to inform immigrants of their rights. The meeting emphasized that all non-citizen immigrants need to be extremely wary of the Trump administration.

“They will use everything they can to get rid of us,” said Ana Lilian Campa from the International Institute of the Bay Area, herself an immigrant.

However, the meeting also stressed a strong sense of solidarity between Castro Valley’s immigrant residents and the school district. Superintendent Parvin Ahmadi told parents that CVUSD welcomes all students, regardless of their backgrounds.

“As long as you live in Castro Valley, your children are our children,” said Ahmadi.

One thought on ““We all came from somewhere””