Students and faculty gathered before school in the courtyard on Friday May 15 to celebrate the life of Terri Byrd. Leadership students handed out candles and pictures of the joyous junior, as people came to pay their respects and share their memories.

On the stage was a memorial dedicated to Byrd: candles lined the site, surrounding a framed picture and banner filled with signatures. Following a moment of silence, junior Mia Knight, Byrd’s best friend, spoke up.

Knight and Byrd had met in middle school, remaining close friends ever since. Knight spoke of her compassion, sharing memories and stories that highlighted their extensive friendship.

“She cares. She cares so much,” Knight said. “Even if you don’t know it, she probably cared for you too.”

“She was the nicest person I ever met,“ said junior Maya Shumpert. 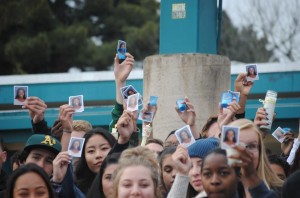 One by one, more of Byrd’s friends spoke up, fondly recounting their memories of her. Stories touching upon her “terrible” driving, outrageous dares, and free-willed spirit were brought with a sense of melancholy; although they had lost their friend, those close to Byrd refused to remember her for her death, but rather for the times they had with her before their loss.

They hoped to reflect Byrd’s positivity, knowing that she would not want them to remain sad for long because of her death.

“Let’s start reaching out to others in Castro Valley, as a family,” junior Dante Sewell said. “Just be strong, for Terri.”

Byrd is remembered for her energy, potency, and vitality. She spent much of her time at CVHS developing close relationships with her classmates and teachers, gaining the reputation of being caring, while also being the sarcastic “person I looked forward to arguing with every day,” one friend recalled. Her unique personality contributed to the charm of CVHS, and without it, the campus is undeniably different.

On the preceding Monday, an announcement was made schoolwide, delivering the devastating news. Over the weekend, Byrd had passed away.

While her death still remains under investigation, her peers have taken tremendous measures in ensuring that her life is honored, and that her memory is never lost.

When news first broke of Byrd’s death, the campus was hit with an overwhelming sense of tragedy. Only days ago, she had walked down the hallways, sat in her classes, and spoken with her friends. No one could have predicted what was to come.

Students and teachers alike broke out in tears, some even walking off campus, unable to handle the grief. There was no one on campus who didn’t feel the effect of her death.

Byrd’s ceremony ended with a somber poem, written and recited by junior Amanda Dwinell: “Nothing has changed….Change is good, just pray for better day….We see you everywhere.”