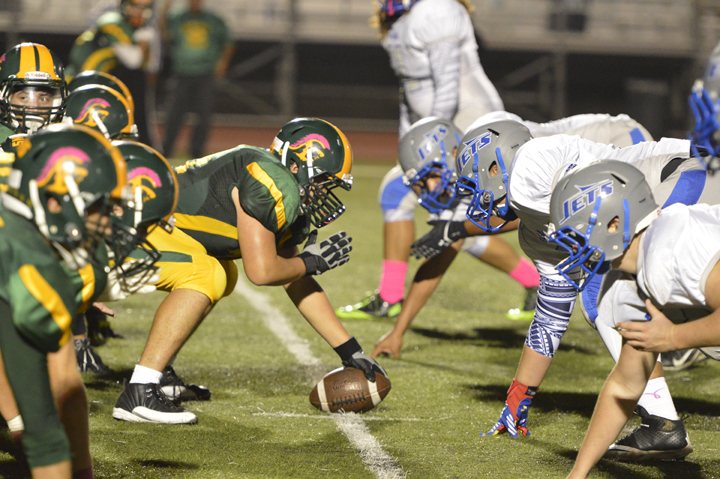 Some have questioned the safety of artificial turf used at CVHS and many schools across America, raising concerns about the health of Trojans who practice and compete on our field. Many people are beginning to think that the fields’ “crumb rubber,” made up of diced up tires that form the base of the artificial turf, contains dangerous toxins and causes cancer.

Students seem worried about the possible health hazards the field at Trojan Stadium may contain.

“There are P.E. classes that are on the turf for every single period of the day and they are probably on the turf for the majority of the period and that would be concerning if the turf was harmful because it would be harming almost all of the kids in the school,” stated CVHS student Kyle Rocha.

“I’m certainly worried, I think that it’s an issue we should be open to looking at. We should reach out to Kaiser to see what kind of tests they’re doing on this topic,” commented Principal Blaine Torpey.

School nurse Sandee Velasquez had an opinion on the safety of the crumb rubber as well. “I think that there should be more testing because our kids do spend a lot of time on that field,” she said.

University of Washington assistant soccer coach Amy Griffin has noted a disturbing trend among athletes who played on crumb rubber turf. She has compiled a list of 126 soccer, field hockey, and football players from across the nation who have been diagnosed with various forms of cancer.  Eighty-two of those 126 athletes were soccer goalies, who are known to dive onto the turf repeatedly during practices and games. In other words, over 65 percent of the athletes that have been recorded to have gotten cancer were goalies, and the numbers are continuing to grow.

These dangerous accusations have many people skeptical. Some players who are dedicated to their sport nonchalantly face this possible danger.

“I’m not actually worried about it. It doesn’t frighten me because I’m playing something that I love and it keeps me healthy,” stated varsity soccer player Jessica Ko.

But according to the Sierra Club, there was a 2007 report by California’s Integrated Waste Management Board that stated: “Toxins in tire crumb exceed hazard levels for children by 220 percent. These toxins include arsenic, cadmium, hexavalent chromium, cobalt, copper, lead, molybdenum, nickel, and zinc — not substances anyone would want their children playing in.”

There was also a study conducted in 2009 by the U.S. Environmental Protection Agency (EPA) that showed that the crumb rubber contained carcinogens as well as other hazardous material such as arsenic, lead, and cadmium. It claimed, however, that the study it had performed was limited and that the results should be considered inconclusive.

The EPA originally supported the idea to recycle tires for artificial turf to solve the issue of America’s used tire stockpile, which was at a whopping one billion tires when recycling of the rubber began. The tire stockpile was seen as a hazard because it increased the chances of toxic fires as well as disease, since tires attract mosquitoes to breed.

The EPA worked alongside the Scrap Tire Workgroup as it mass produced crumb rubber for fields throughout America, as well as encouraged states to give grants to schools and park districts for installing the turf.

Though the recycling of tires and creation of crumb rubber was successful and dropped the tire stockpile down to 75 million, the EPA did not thoroughly investigate the possible outcome of such extreme usage of the crumb rubber when it began mass production, critics say.

“EPA believes that more testing could be done, but we have no plans to conduct additional studies and the decision to use tire crumb remains a state and local decision,” stated the U.S. EPA. It should also be noted that the EPA ended its connection with the Scrap Tire Workgroup in 2014.

The concern hits home for CVHS since the artificial turf field has been a main location for sports and P.E. since its construction in 2006-2007. The community passed an $11 million bond for the stadium’s construction.

“I am unaware of any dangers involving our turf field. If the turf needs to be replaced, we will replace it. It would cost (about) $300,000,” stated CVHS athletic director Andy Popper.

If these fields do cause health problems, the effects might take years to show. In the meantime, the Trojans are running on the field, diving into the turf and taking their chances.

“Statistically, one in three adults is going to get cancer regardless. It all depends on many things, such as jobs they had, their genetics, and their lifestyle. However it is a possibility that there could be links, but there’s too many questions to form a conclusion,” commented Velasquez.

“I would imagine that if our field shows to contain carcinogens and other hazardous materials, then we will make appropriate decisions to ensure student safety,” stated Torpey.