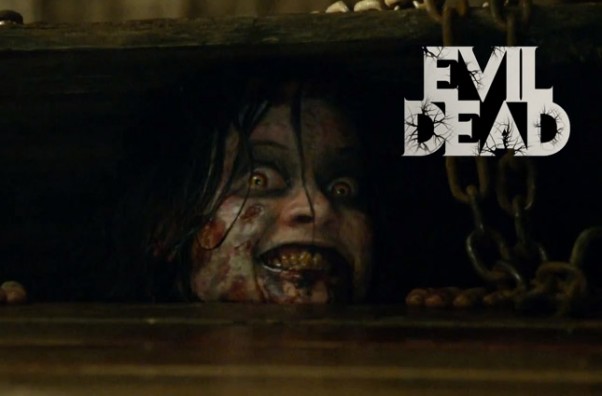 Evil Dead proves to be a gory, exciting ride that nails the classic horror feel through a deafening soundtrack, a corny plot, and some remarkable special effects.

Based by the 1981 classic, this remake of Evil Dead barrels right into the familiar story of placing five old pals in a run-down cabin in the middle of a forest, where they discover an old book filled with demonic illustrations and warnings.  The audience I saw it with made the experience even more rousing—almost everyone in the theater was either screaming or burying their faces in their date’s necks.

Mia (Jane Levy) is attempting to detox from a drug addiction with the support of her friends Eric (Lou Taylor Pucci), Olivia (Jessica Lucas), a registered nurse, her brother David (Shiloh Fernandez), and his girlfriend Natalie (Elizabeth Blackmore), a physician, at Mia’s family’s cabin deep in the woods. Of course, when one of them gets the bright idea to read aloud from a certain book of the dead recovered from the basement, Mia soon finds herself tormented and possessed by a demon whose erratic behavior causes her pals to initially mistake it for withdrawal-related crankiness.

The movie then sets into pace and Mia’s possessed soul sets off a cascade of gloriously violent events that lead to an intense 15 minute final ending.

As a general look, however, the amount of vulgar profanity that the demons uttered out throughout the movie turned me off, as I felt it didn’t jive well with the movie—I couldn’t take them seriously and it made me consider how much the generation has changed from the ’80s to present. Even so, Evil Dead was a thrilling movie to watch if you don’t mind tons of mind boggling blood fests and scenes that will make you cringe or fly out of your seat.