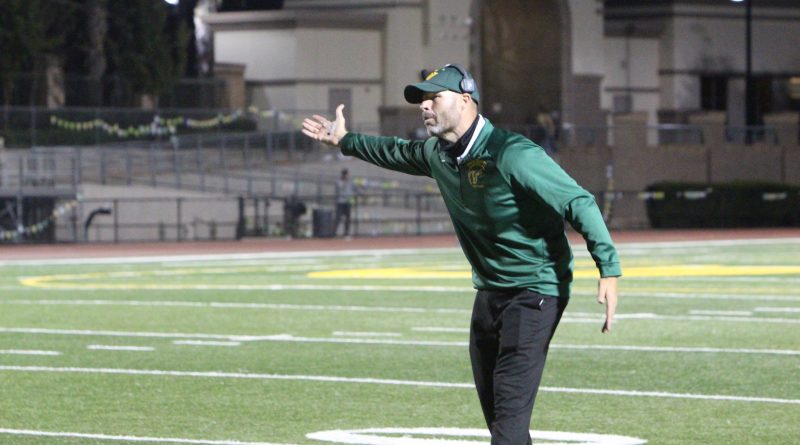 “Before every game, he gives great motivational speeches, and always pumps us up during the week,” said junior wide receiver and defensive back, John Jacob.

Now in his 18th year of coaching, Molzen has been recognized as the 49ers Prep Charlie Wedemeyer Memorial Coach of the Week. The award also comes with a grant. However, Molzen wants to make it clear that, although he is being recognized, the award is really dedicated to all of the team.

“I look at it as we were the team of the week and I just happened to be recognized,” he said.

Molzen also credited the assistant coaches and players in getting a dominant 55-21 win over the Washington Huskies on Oct. 29. The Trojans dominated from the get go, scoring a touchdown on the opening play of the game by running back Jalen Melancon.

A four-year player at CVHS himself, Molzen always knew that he wanted to get back into coaching, and was inspired greatly by his coaches. “Good high school coaches that instilled a lot of things into me as a young man,” he said.

As for the grant, Molzen sees that as a great benefit for the future.

“Football is a pretty expensive sport,” he said. “If it allows us to get some new protective gear, whether it be helmets or shoulder pads, those can help our kids for several years.”

As for what’s next for the Trojans, the team unfortunately did not make the playoffs despite another dominant 35-7 victory over Berkeley. However, Molzen’s influence and dedication still inspires the Trojans.

“He is a second dad to us,” said junior Franco Sarno, a running back. “He’s always making sure we’re not doing bad in school or life outside of school. In all of his free time he’s game prepping and watching film.”

6 thoughts on “Molzen Recognized by 49ers”