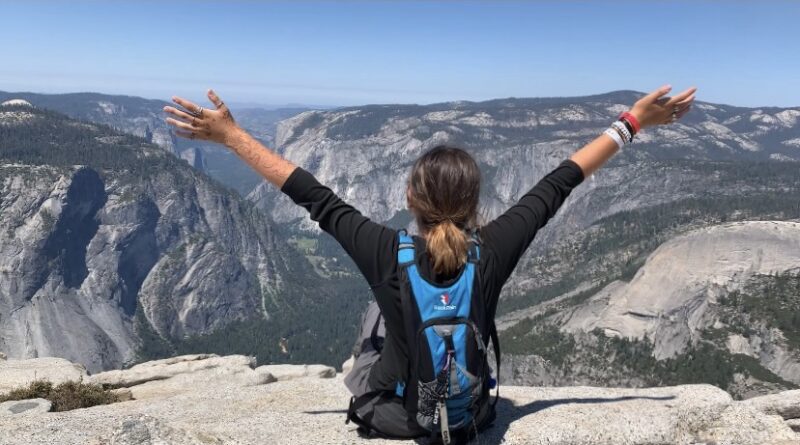 CVHS junior Grace Fesmire conquered Yosemite’s Half Dome on July 21. After training for the past year, Fesmire and her family spent 16 hours hiking and climbing, making it to the top and back down again.

“I think my favorite part was getting to the top. It was like ‘wow, I actually did this.’ It was really windy up there and I thought I would blow over, but it was an accomplishment,” said Fesmire.

Fesmire completed the climb with her mom, aunt, and grandpa. They trained for a year, doing different exercises to build stamina for the hike. Before climbing Half Dome, Fesmire had completed smaller hikes to prepare. In addition to completing different trailheads every week to get ready, she had also climbed Mission Peak in Fremont.

Half Dome is located in Yosemite National Park, and has a height of 8,839 feet. The total round trip hike is 16.3 miles, and climbs more than 4,000 feet. With Half Dome being such a well-known part of Yosemite, there are many people who hope that they’ll be able to climb it.

Fesmire’s family had the idea to climb Half Dome about a year ago, and they entered the lottery to be able to climb it. They were surprised that they were picked so quickly, and were excited to have the opportunity.

On July 21, Fesmire and her family left their RV at 4 a.m., and walked to the trailhead, where they began their climb.

The scariest part of the hike for Fesmire was the cables which help climbers ascend the last and steepest part of the climb. “It’s the last part, and a lot of people stop before then and say, ‘okay this is enough and go back.’”

The day that they completed the hike, there were a lot of people there, which made the cables even scarier for Fesmire. She described the wood slats that were in place on that part of the climb, and how the climbers would have to wait for each other before continuing.

There are climbers going up and down at the same time during that part of the hike, so Fesmire would have to move up to another wood slat, and then wait a few minutes so someone else would be able to get down. “For me, that was the scariest because when you’re waiting, you’re basically on your tippy toes on this wood slat and relying on it, and just because you’re so high up and want to get to the top,” said Fesmire.

Fesmire stayed motivated during the climb because she wanted to be able to say that she had climbed Half Dome. After working hard for the past year to get ready for the climb, Fesmire and her family couldn’t give up, and they pushed through the climb to be able to finish it.

“We’re actually planning on doing it again, and we’re supposed to do it quicker, and do it when it is not 95 degrees and blazing hot,” said Fesmire.