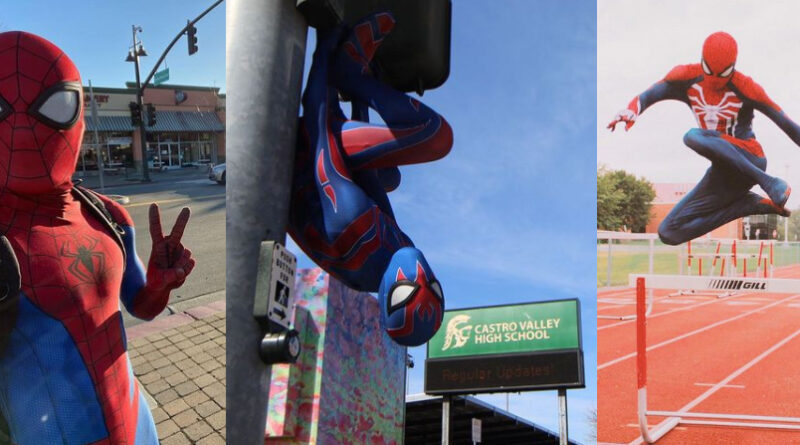 A friendly neighborhood Spider-Man has been spotted numerous times in Castro Valley. From traffic light poles to train tracks, the superhero has been photographed at numerous locations and hotspots in Castro Valley. He even occasionally brings along his other spidey-friends, including alternate versions of other spider-men and spider-women from the Spider-Verse. The savior even seems to be taking a liking to social media, posting pictures of himself doing parkour under the Instagram tag @anti_social_spiderman.

Throughout his travels through Castro Valley, the Spider-Man has also visited other locations around the Bay Area, taking action shots in places such as San Francisco, Oakland, and more! Rain or shine, this hero will take every opportunity to cling onto something new, taking the perfect action shot along the way.

While no reports of Spider-Man saving civilians in peril have surfaced yet, many seem to be taking a liking to Spider-Man. As junior Mahmoud Abdullah exclaimed, “I knew about cosplayers, but I didn’t know Castro Valley had a Spider-Man! Castro Valley is so small, it’s really cool to see a Spider-Man around here.”

It seems that even the local comic book shop has taken a liking to vigilante. Crush Comics employee Tyler had a few thoughts on Spider-Man. “Even my boss talks about him. Everyone seems to be chasing him around. I have no idea who he might be, but he’s like a celebrity around here. I wish I got to see him in person!” he stated.

The identity of the man behind the mask remains a mystery but the personality underneath stands out. This masked vigilante travels across the Bay Area attempting to inspire others to make the best out of the gloomy situation. Our local Spider-Man himself preaches, “Be Kind. Be Genuine. Be Generous… I’ll still go out of my way to be there for others even if we share nothing in common at all.”

Not everyone has fallen for the Spidey-Shenanigans however. A bitter and jealous CVHS social studies teacher who teaches economics and AP economics and wishes to remain anonymous, puts it,

“Spidey?!…pffffttt, whatever, ppsssttt, mmrrrph…what is all the hubbud is about?  He is a has been. That dude has been riding the coattails of the X-Men for years,” said a bitter and jealous CVHS social studies teacher who teaches economics and AP economics and wishes to remain anonymous.

“I knew him way back, in fact we went to school together in Metropolis. We became real tight after his parents, the Waynes, passed away in a robbery. But then we had a falling out in high school because of a situation with Mary Jane, I’ll let you connect those dots,” the teacher said. “Flash forward 20 years later, I see him in Castro Valley swinging around the one story roof tops. Wow, how that mighty have fallen. From protecting folks from the evil of bad boy billionaire Lex Luthor and crazy evil genius the Joker to helping grandmas cross the street in a podunk town.”

Spider-Man would not comment to us about the validity of these claims. However we have it on record that Spider-Man attended high school in New York and that his parents unfortunately do not have the surname Wayne.

Others have commented on how they believe that Spider-Man’s travels have been unsafe in the midst of the pandemic that we are in. “I think Spider-Man should be COVID cautious and wear a mask. COVID affects folks from all walks of life, even superheroes,” said Assistant Principal Brigitte Luna.

While the identity of our Spider-Man vigilante remains a mystery, one thing is certain. He is bringing in a lot of hope and happiness to the community in these trying times, and with the following that he has gained on social media he seems to be making a positive impact on many people’s lives. While our local Spider-Man may not have the web-slinging abilities of the real Spider-Man, he certainly has the power to change the lives of others. As Spider-Man himself says, “With Great Power, Comes Great Responsibility.”

6 thoughts on “Spider-Man swings into town”