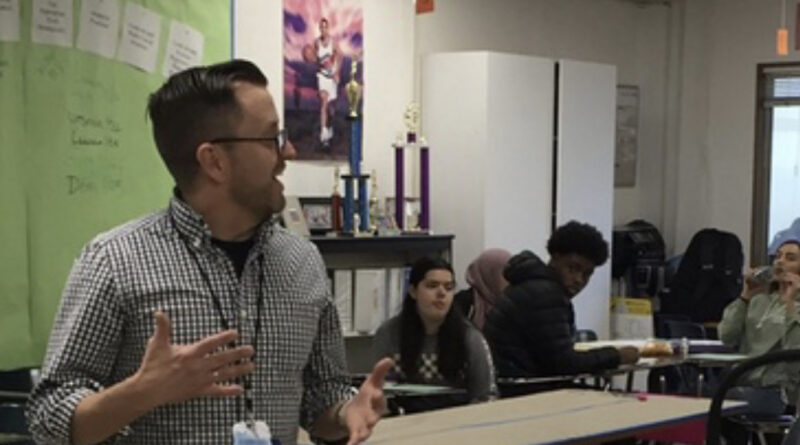 In his second year of teaching, math teacher Jeffrey Small won honors as teacher of the year at CVHS. A prime example of a hard-working and caring teacher, Small has always put his students first and continuously supports them even through the difficulties of distance learning.

Before becoming a teacher, Small had a job completely different from teaching but he later decided that he wanted to do something that gave back which is exactly what he does now.

“I wanted to do a job that made a difference. I’d worked for so many years in the for-profit world before I became a teacher and when I decided to make a change, I was debating between a couple of different things. It was much more important that I did a career that really gave back, and I feel like this one does that,” said Small.

Small has made such a positive impact on his students because of the amount of time and attention he gives them before, during, and after the school day by offering office hours and homework help. He also does his best to make sure students and parents are up to date on everything happening in his class and in the school.

“Mr. Small really obviously cares about his students and that shows in the way he teaches. He will take time out of his day to make sure that his students understand concepts and aren’t struggling. He tries to go at a pace that’s best for everyone and understands that it’s hard to learn during these times,” said sophomore Gia Mitra.

“Mr. Small is an empathetic educator who does not give up on his students. He urges students to do their best, but also expresses care for their hearts,” said Assistant Principal Brigitte Luna.

Even after receiving the award, Small acknowledged how hard every teacher has worked over distance learning and how they all deserve to be acknowledged for their hard work as well.

“Winning teacher of the year during this time does feel bittersweet because this has been such a hard year for all teachers at CVHS and beyond. Any teacher who survived this year deserves an award,” said Small.

No matter what students want to do in the future in terms of a career, Small wants them to relate that back to math. Instead of focusing on the calculation aspect of math, he wants them to learn how to collaborate and expand on their thoughts and use that in the real world.

“I want to push my students and give them something to work towards as opposed to just teaching how to calculate things. There is always a reason for education and no matter what they go on to do, I want them to relate that back to math and the critical thinking, reasoning, and logic we learned,” said Small.