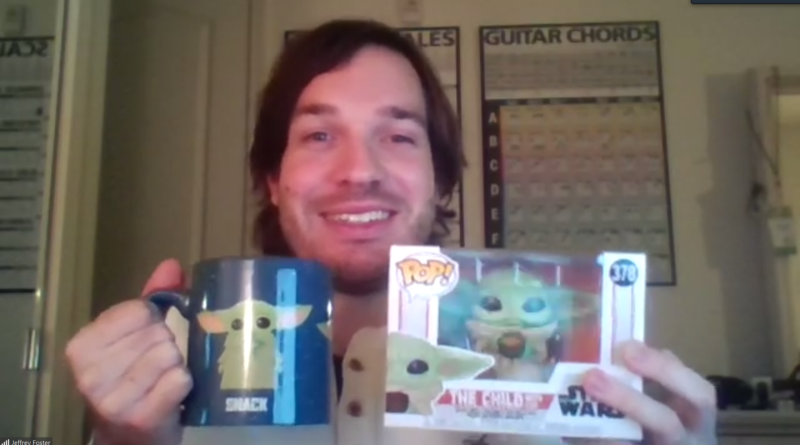 A relatively new teacher strives to improve his teaching skills, but on top of that, is not your average Star Wars fan.

“There’s a lot of things about how managing my classroom has changed. I have a better idea of what I accept and what I don’t accept in the classroom,” Foster said.

Unlike most teachers, Foster started teaching at CVHS as an intern to substitute for a biology teacher. Prior to that, he was a tutor at Dublin for two years, but did not have a full-fledged teaching career then.

One of his favorite types of activities with his students is team competitions. At one point, he had to buy buzzers for Jeopardy in his biology class because students got competitive enough to accuse him of favoritism prior to buying them.

Beyond teaching, Foster takes some time to enjoy Star Wars during the day. He has advised the Star Wars: Canon & Beyond club for three years, and watches Star Wars movies and videos alongside its club members. He took part in and won the “Star Wars vs. Marvel” Kahoot match in December 2019, showing he is well-versed in both fandoms, a surprise to many that were there.

“There’s a lot worse things I have to do than watching Star Wars. It’s a nice kind of break from the school day,” he said.

Foster’s enthusiasm for Star Wars is not at all new. He recalled going to the theaters for each of the prequel films, which were released in the late 90s and early 2000s, and every Star Wars episode film after that.

Despite a general distaste for the sequel trilogy when compared to the original and prequel trilogies, Foster offers a different perspective, applauding the efforts made into creating a unique plot for “The Last Jedi.” He also shows an understanding of the finale of the Skywalker story in “The Rise of Skywalker.”

“I’m okay with it, but at some point you have to move on, especially for someone who has been in the Skywalker family for nine episodes,” he said.

Foster is excited for new Star Wars content, such as the “The Mandalorian,” which he feels offers different perspectives of other characters and their place in the galaxy.

Star Wars is a film series Foster definitely feels others should at least give a try if they have not watched it.

“It is something you don’t always see until sci-fi becomes more mainstream,” he said.

One thought on “The Force is with Foster”