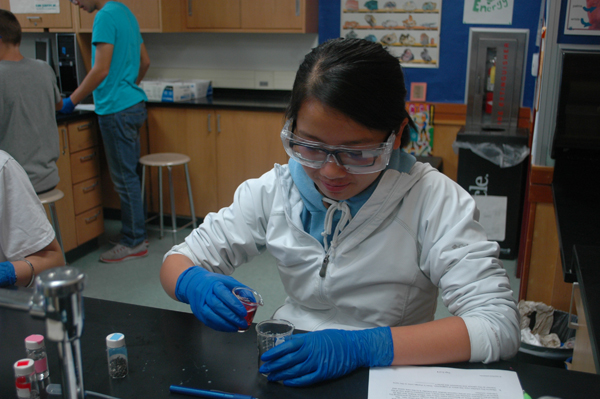 Castro Valley Unified School District has been fined $1,050 by the Occupational Safety and Health Administration (OSHA) for four ventilation and health violations in the 700 wing. OSHA inspected the science building in September and issued the citation on Jan. 27.

Recently, a science teacher decided to call OSHA to get the building up to safety codes. Science classrooms were missing the necessary stations, such as fume hoods and eyewashes, to ensure the safety of their occupants. There were also concerns about the ventilation in the 700 hall. Since the summer of last year, the district has significantly improved the ventilation system and other needed safety precautions.

OSHA reported four violations: 1) there were no self-contained eyewashes in the storerooms between the classes where chemicals were being handled, 2) one lab-type hood was not equipped with quantitative airflow monitors, which continually indicate whether air is flowing into the exhaust system, 3) not all fume hoods were marked to show the average face velocity of at least 100 feet per minute, and 4) the ventilation rates on every system used to prevent exposure were not tested annually.

Originally the agency set the fine at $2,430. On Feb. 5, OSHA reduced the fine to $1,050 in consideration of the safety improvements.

“They came, found more faults than indicated on the citation, but based on their assessment that the district has been making an effort to mitigate the issues, the findings are actually, in essence, a small fine,” said teacher and Science Safety Committee member Deborah Yager.

Stickers placed on fume hoods indicate the date the hood was tested, the velocity of the exhaust rate, and the sash height, which measures the opening of the hood door. Fume hoods are supposed to be inspected yearly, and some stickers indicated they were out of date.  All fume hoods are now in compliance.

Prior to the inspection, the committee and district had fixed many of the issues already. The final eyewash stations will be installed this month.

The Science Safety Committee continues to meet monthly to keep communication open between the members and district.

“Dr. Yager and I are continuing to define and finish the chemical hygiene plan,” said Assistant Principal Matt Steinecke. “As with everything, it just takes time to fix things.”

“While the district should and was held accountable for its negligence, it has stepped up and made things much, much better. We wish to maintain a positive spirit going forward,” said Yager.

One thought on “State cites district on 700 hall safety”