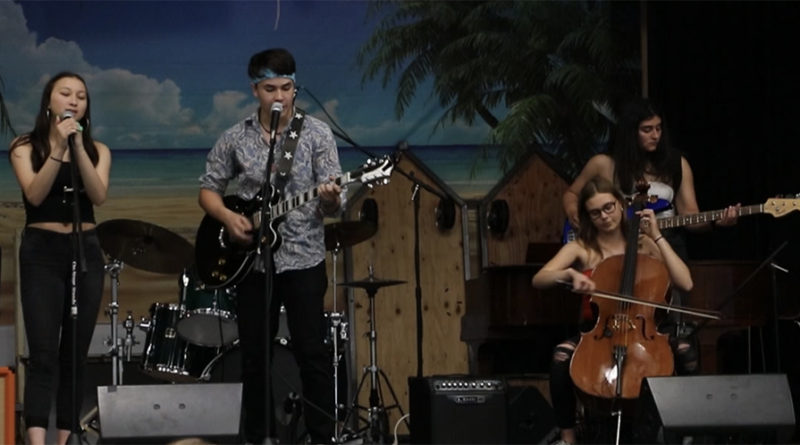 CVHS students Haejin Lee and Michael Creekbaum, dual talents behind the band Citrus Dream, won the rock band showcase hosted by the Wellness Center in partnership with the mental health charity A Brighter Day. Their success has earned them a free personal concert of 60 guests and recording time in a professional studio.

The Bay Area based charity A Brighter Day brings showcases like ours to various schools as a tool to not only relieve stress among teens, but bring awareness and attention to resources available for those dealing with depression and anxiety.

Bags containing helpful information about support centers and crisis lines were distributed after the showcase by a team lead by the charity founder and president Elliot Kallen.

Kallen and his wife lost their 19 year old son to suicide in 2013, and have since been on a mission to prevent other teens from facing the same path.

In the cafeteria, Lee’s powerfully soft vocals and Creekbaum’s “tasty” guitar riffs, as put by one of the judges, blew away the crowd. When the ultimate votes were cast by the audience and the judges chose their personal picks, the results were extremely close between the three bands.

Each band showed skill and talent, their promising individual styles captivating the audience. Filled with electric riffs, unique and stylized vocals, and classic rock edge, the bands were artistic and engaging.

Both original and cover songs were performed, with everything from “Old Town Road” by Lil Nas X to Frank Sinatra classics making an appearance.

Ideally, the future will bring the stage, atmosphere, and equipment worthy of the stellar performances by our student bands. The rich music was put off by full-room lighting and a strangely cluttered stage featuring a confused backdrop of partial curtains and unused clutter.

“It feels more real when the lights are off,” says junior Nayeli Silva about the confused environment.

Still, there is hope for the future of the showcase, as the Wellness Center hopes to make it an annual CVHS tradition and bring the event to new heights in coming years.

As the showcase grows, so will the reach of mental health services to the student body and the stress relief of creative expression.