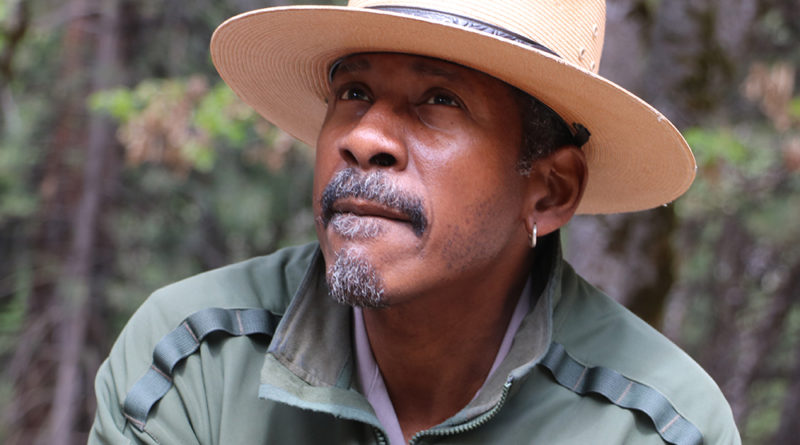 Shelton Johnson, an interpretive ranger who’s educated visitors to Yosemite National Park for more than 24 years, shared these thoughts and insights in a special interview with Olympian staff members.

Q: How did you come from Detroit to Yosemite?

A: I think the more pertinent question would be how did I get from Detroit to working in a national park? I was in graduate school at the University of Michigan and I was majoring in poetry. My background is in classical music and literature, and I wanted to work in an unusual environment. I had an opportunity to spend the summer in Yellowstone National Park and I accepted a job as a dishwasher at the Old Faithful Inn. Not many African Americans write about the wilderness experience, so I figured that would be a good way to make my mark in literature by writing about something that most people don’t write about, but something that is also significant. That job as a dishwasher ballooned into other positions and eventually I took a position as a seasonal park ranger in Yellowstone. That led me to Yosemite over a few years.

Q: Why do you think people enjoy coming here so much?

A: I think it is the most beautiful place in the world. It’s an iconic park, it’s a world heritage site, so our visitation averages five million people a year, but I think anyone who has entered Yosemite has had the experience of having Yosemite enter them. It’s not something that is just sitting in a painting or in a photograph. It’s something that is dynamic, it’s in three dimensions, you can inhale it, you can touch it, you can feel it. It engages all the senses and has that experience of wonder in a space that’s not in a book like “Alice in Wonderland” or the works of C.S. Lewis, but it’s something that you can actually inhabit and walk into.

Q: You’ve told the story of the Buffalo Soldiers. How did you learn about them?

A: Well I knew about the Buffalo Soldiers before I came here as an African American who is interested in history and also interested in the west. But I didn’t know they were here until I actually spoke with a ranger by the name of Althea Roberson who was also African American. She was the only interpreter really telling that story and it made me wonder. I did my own research and learned that these soldiers were here in 1899, 1903, and 1904. They built the first trail to the top of Mount Whitney, which in 1903 was the highest mountain in the United States. They built the first usable wagon road into the Giant Forest in Sequoia National Park. Here in Yosemite, they built an arboretum. So it just struck me that they did these nationally significant things, but were almost completely forgotten. So that’s the foundation of my work to make what was unknown, known, to make what was forgotten, remembered.

Q: Why do you think it’s important to spread the stories about these Buffalo Soldiers?

A: It’s important because many African Americans have no idea of their heritage in our national parks. They don’t think these environments tell their own stories because we evolved in a culture of separation. And think it about this way, everyone wants to have a good experience in a national park or they want to enjoy themselves but if you are asking an African American to venture into a landscape where they don’t know if there are many African Americans already there, there’s that question of whether or not they will be safe… So that’s why I wrote to Oprah Winfrey. I figured if she said, “I love Yosemite, Yosemite is so beautiful, you should go their too,” then other African Americans would go, “Oh okay, if she was there then maybe we can do it.” President Obama was here in 2016 with his family and I remember him welcoming me to the White House in 2009. And I remember thinking at the time, here I am at the White House in the seat of power for the United States and this was built by slave labor. And here I am at the national park and he’s here with his family and I’m here as a modern day descendant of the Buffalo Soldiers and now I’m welcoming him to something that belongs to him as much as to anyone else. Not just because he’s president, but because he’s also an African American.

Q: What do you think we should do in order to preserve the park for our next generations?

A: Just do what you’re doing now. Using it. If we don’t utilize the parks, if we don’t enjoy them, then they’ll fall out of favor, if they fall out of favor they can be voted out of existence as readily as they were voted into existence. If Yosemite had not been set aside as a national park in 1890, this would probably be the most exclusive gated community in the United States. But this is a democratic institution and national parks are part of a democracy in which you can walk, breathe the air, touch and feel what it really means to be an American. This is history made tangible, made real, and that’s what’s important about it. It’s not just a book. It’s a place. It’s a story, but it’s also a world that you can enter and enjoy.