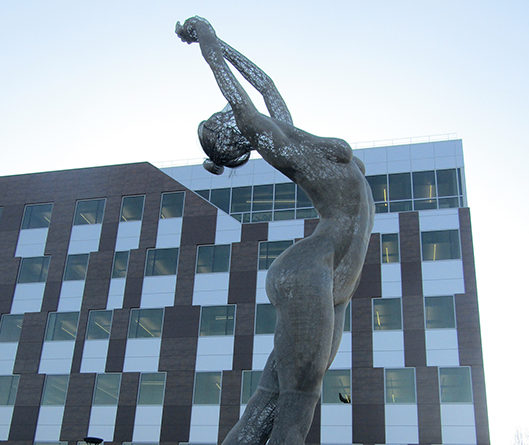 “What would the world be like if women were safe?,” sculptor Marco Cochrane asks, and as viewers pass by, they can not help but tilt their heads up and admire the 55-foot steel nude dancer, her back arched, head thrown back, and hands clasped and reaching towards the heavens.

The dancer, titled Truth is Beauty, was installed in front of the San Leandro Tech Campus in early October, to the surprise and excitement of many local art lovers, including AP Art History teacher Jo Sutton.

“What surprised me most about the sculpture, absolutely, was the scale of it,” she said. “It’s also a great example of how knowing the story behind a work of art actually makes it even more powerful.”

The story here is of a dancer named Deja Solis, a tall woman who Cochrane used as a model for several sculptures. He described her as being “worried about being tall.”

“She was all scrunched down, trying to be shorter,” he said. “She saw the sculpture and said, ‘Why do I do that? I want to be tall!’”

In this new sculpture, Cochrane succeeded in portraying Solis just as she wanted to be seen–tall and beautiful.

From the beginning of Cochrane’s journey as an artist, he has been drawn to the subject of the female body as a way of addressing the continuing problem of female oppression in society. A native to northern California, Cochrane has recently been commissioned for several projects in the area.

Cochrane is very open about the experiences in his own personal life that led him to dedicate his art to the issue of women’s rights.

“As a child, I was deeply affected by the abduction and violation of one of my friends. I thought, the man that did that to her must not have realized she was a real person. I have been trying to solve this problem my entire life through my art,” explained Cochrane on his website. “The women I sculpt are safe, present. Look at them.”

In this sculpture, the first thing you notice is the immensity of the work and the strength and power of the woman in her elongated pose.

The sculpture’s nudity startled some local viewers, whose reactions were highlighted on local TV features of the work, but Cochrane made the intentional decision to do all his sculptures nude in order to address the prevalent shame associated with the female body.

“I intend to directly challenge the notion that the female body must always carry a sexual charge,” he said. “This is dangerous and we need to change the way we think about it.”

The piece’s message is already resonating with many people who have come across this work.

“What I love most about the sculpture is the story of self-acceptance. Truth is beauty; self acceptance is the key to happiness. I feel like it’s only taken me my lifetime to get to that point,” said Sutton emphatically. “Great works of art like this can help people figure this out sooner. When you really learn to truly accept who you are as a person, it’s the most liberating feeling.”