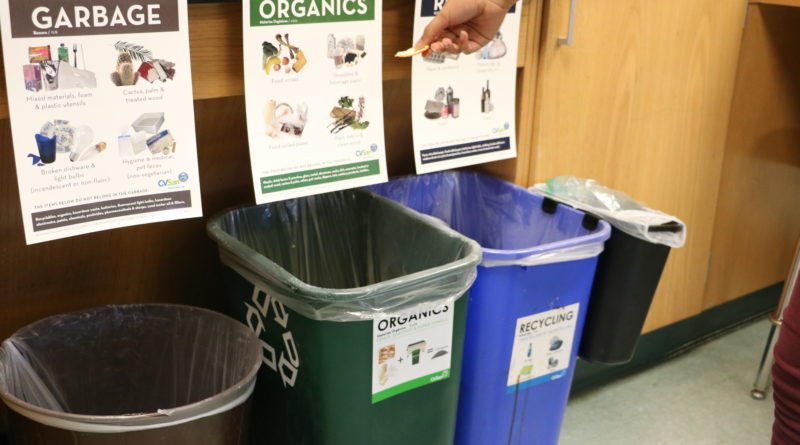 A new three-bin system was introduced last month in both the 700 and 100 halls to promote the better sorting of waste, thanks to the Smart Environment Club. The club’s leadership has teamed up with the Castro Valley Sanitary District (CVSan), our leadership class, and the custodial staff to introduce a new pilot program that implements landfill, recycling, and organics bins in every classroom.

“The pilot has been a long process that we have been working on for a while with CVSan. It has really opened my eyes to issues on campus I never thought about,” said junior Mia Babasyan, club president.

The Smart Environment Club was established on campus by teacher Deborah Yager and her passionate students nine years ago. Members of the club have since made a true difference on campus by starting a bottle and can recycling system, donating two Brita water filters, and participating in multiple Earth Day clean-ups.

The club’s newest project revolves around creating more accessible waste bins so that students are encouraged to sort their trash correctly and help the environment. In every 100 and 700 hall classroom, one student will be designated to empty the recycling bin in their hallway during seventh period.

The program was made possible thanks to the hard-working custodians, and donations made by CVSan, and leadership.

“Even though this is just a trial, it is very important that everyone is on board. Students, teachers, and custodial staff all play a major role. In return, a fantastic system will be in place that is best for everyone,” said Babasyan.

A few complaints regarding the organics bin have already risen. Some staff members may fear that the bins may cause smells in the classroom. However, the developers of this program provide strong assurance that as long as the bins are emptied on time, it should not be a problem.

Junior Michelle Moreno, the club’s vice president, voiced her support for the system as well.

“We hope that with this method, more students and staff will have a choice when throwing away their objects or food. Personally, I get annoyed when I’ve just finished my fruit and I’m holding onto the peel for so long because an organics bin is not accessible to me,” Moreno said.

The pilot program is meant to make problems like this disappear, as well as make our school a greener place.

“With this pilot, we hope to make sorting a habit, not a chore,” said Moreno.