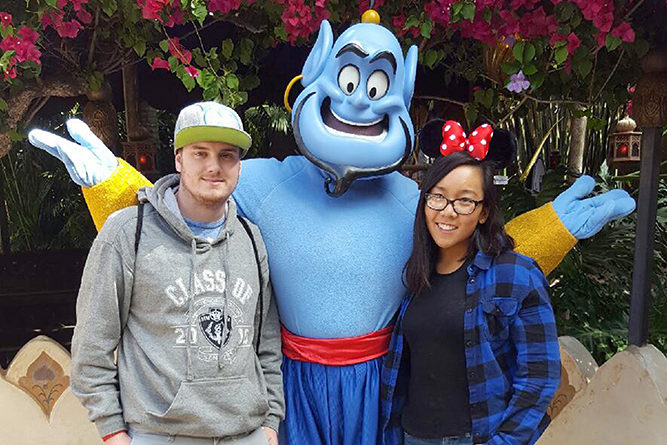 Imagine the opportunity to play music in a Disney recording studio and hear your music being played with Disney animated films. The CVHS band and orchestra had the privilege to do so.

Over spring break this year, members of the CVHS symphonic band, wind ensemble, and orchestra went on a trip to Southern California to perform music at certain clinics and studios and enjoy themselves along the way with a plan packed full of fun activities.

The travellers started the trip by departing on Monday for the long bus ride to the Los Angeles area. On the way, they stopped at Carlmont High School in Belmont to perform an exchange concert where each school’s bands and orchestras played for each other.

“I really liked the exchange concert,” said Lotan Yeung, a junior in orchestra, “It was nice to see the level of playing at a different school and heartwarming to know that there are other dedicated musicians in the Bay Area.”

After that the students spent the rest of the day in buses headed towards their hotels.

The next day, the students stopped at Newport Beach for some fun in the Southern Californian sun, and attended a clinic at Cal State Long Beach, where the students had the opportunity to work with college professors on their music.

That night, the students attended a Medieval Times performance and dinner, where the students let some of their rowdy side out while cheering for their knights.

The performers spent the entire next day in Disneyland and were given the opportunity to play in a Disney studio, where they would play music from animated movies with a true studio experience.

“My favorite part of the trip was being able to record music in the Disney studio. It was mind blowing to see how much a soundtrack affects a movie,” said Louie Tran, a senior in wind ensemble.

Although for the most part, people generally enjoyed their time in the park and opportunity to spend it with their friends.

“I really liked that I was able to go to Disneyland with friends and hang out independently,” said junior Kevin Tai, a wind ensemble member.

After the long day in Disneyland and the short night of sleep, the students quickly departed back for home on the buses on Thursday.

“My favorite part of the trip was seeing how the students came together, through the variety of performances we had.  I especially enjoyed the performance exchange at Carlmont High school,” said orchestra and band director Steven Hendee. “I think the band and the orchestra grew a lot from their experience on this trip, they’re better as a result.”