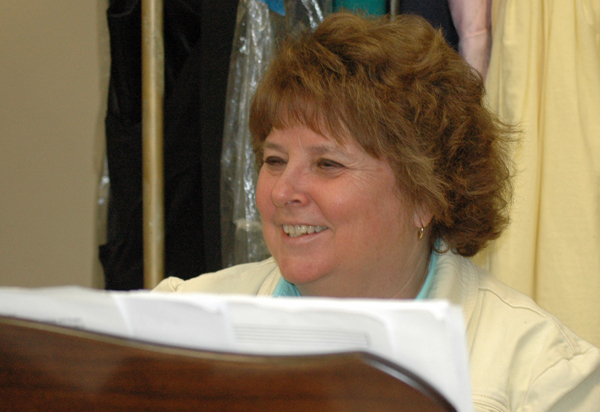 Tears were naturally shed on May 24, seeing as how it was the last choir concert of the year. Yet, an unexpected plot twist occurred which propelled everyone into sobs: Susanna Susoeff, choir instructor at CVHS for 39 years, announced her retirement.

When she made her announcement on stage, students gasped in disbelief, hoping it was a joke, until they realized she was serious. One by one, students came down from the risers, and with an audience still sitting in the house, began forming a massive group hug of over 100 people around the choral director.

Susoeff admitted that the decision wasn’t an easy one and called it one of the most difficult situations she’s ever had to make.

“I can’t even decide what I’m going to miss the most,” she sighed. “The kids, obviously. A good memory of mine was also having Marni Nixon come and have a workshop at the school. It was a very valuable experience.”

Noting two of the most important events in the choir curriculum each year, Susoeff reminisced about being involved in the annual Pops concerts and Golden State choir competitions.

“Pops, as usual, was fantastic and Golden State this year was an amazing experience,” she said. “Just being able to see the students become so excited and passionate is special.”

According to Golden State policy, both the A Capella and Madrigals choirs will have to audition to be able to participate next year. Susoeff expressed her faith in the choir, yet she honestly stated her worries for the future.

“As for the next instructor, I do not know who it will be. I haven’t even turned in my letter of resignation,” she said.

Though she was obviously nervous for the new teacher, she was more nervous for her students.

“The students are comfortable with the traditions,” continued Susoeff. “I hope the replacement finds it important to continue those traditions. It’s what the students enjoy.”

A few choir students have been reconsidering taking the class next year, but Susoeff strongly advised the students to continue.

“Support the new teacher. Stay in the choir family. The bond between all of the students is indescribable, and I want it to last. I don’t want all my talented singers to let their abilities go to waste,” she advised her students.

Susoeff briefly turned to her computer and smiled sadly.

“I’ve gotten so many emails from past choir students telling me how much choir meant to them. I want the current students to continue and realize that importance as well,” she said.