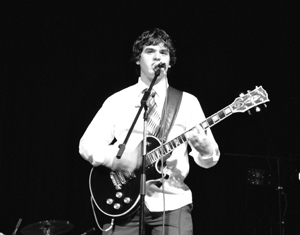 A teacher pulled down his pants and $100 was given away. Dec. 17 was an especially memorable night for CVHS. It was DECA’s Battle of the Bands at the Center for the Arts.

Bands competed for a $100 cash prize. It was a great idea for fundraising; DECA profited from the food, ticket and, t-shirt sales. It was also a great way to watch the bands with students and teachers from CVHS.

When the show started, the host was greeted by chants of his name, “Damori, Damori, Damori.” He was very well liked and obviously well known by many that attended.

All of the bands were very good, but one stood out to me in particular: No Tomorrow. They were the band that opened the show, and under that pressure they had the audience clapping along. They also had the misfortune of one of their band members being absent and had to have another guitarist fill in. Despite everything they had a great performance.

The Geezers were hilarious; the band was made up of teachers including David Roth-Rossi, Nicholas Whitaker, Ian Rodriquez and Jason Marlis. The teachers jammed out to songs including some from the Red Hot Chili Peppers. Whitaker played the guitar, Marlis the keyboard and Rodriquez the bass. Whitaker even ran to the side of the stage to yank his pants down to reveal cutoffs for a costume change. Roth-Rossi played the songs on a video game guitar.

Brandon McChesney and Militant Fam were the only rappers at the battle. McChesney worked through technical difficulties, but was still able to get his message through in his raps. Militant Fam, which is made up of college students from the Bay Area, Ricky Rivera and Malcolm Coronel, rapped to remixes of “Like a G6” and “Cooler Than Me,” which had the crowd singing along.

Fillers, such as, Kyler White played well on their ukuleles.

“Those two kids with the ukuleles were cutest thing I’ve ever seen,” said Roth-Rossi.

Defiler was well received as people screamed, “I wanna see you cry,” lyrics from their song, well before they performed. As soon as they took the stage the audience was on their feet screaming along. A group rushed to the stage to head bang along to the music.

Aviadora took the prize, winning the $100. Lead singer Joel Aguilar threw stickers off the stage to promote the band as he screamed out his songs. His stage presence was good, it held attention, as did the rest if the band, they all knew how to work the stage. They were very professional and were very good performers; the skill they played with will take them places.