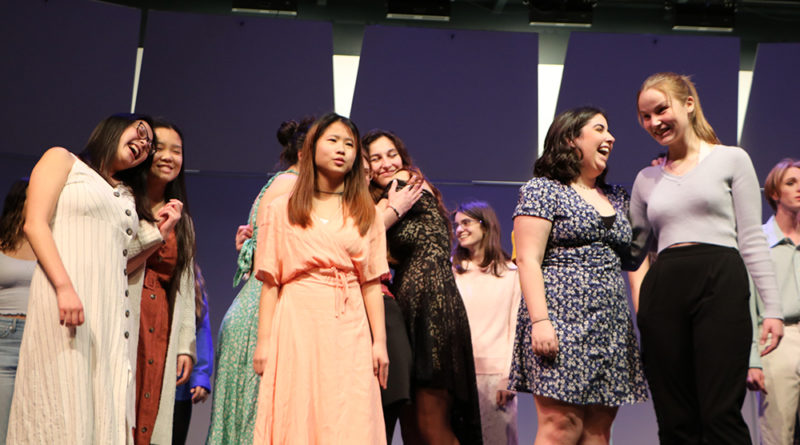 “You got a piece of me and honestly, my life would suck without you,” sings a soloist while kids dressed in black, white, and hot pink jump around and dance.

Pops is the student directed pop music concert that CVHS choirs put on every year. This year, the theme of the show is “Mixtape 4 U.” There will be four shows this year in the Center for the Arts on Feb. 13, 14, and 15.

The theme was chosen to represent songs that students might put on a playlist because the show will be during Valentine’s Day weekend. Some songs that were used in the show include “Someone You Loved” by Lewis Capaldi, “Lose You to Love Me” by Selena Gomez, “Senorita” by Camila Cabello and Shawn Mendes, and “Shut Up and Dance” by Walk the Moon.

What makes Pops so different from other performances is that it is run and directed by the students with little interference from Laryssa Sadoway, the choir teacher. Pops directors are a chosen committee consisting of music directors, administrators, choreographers, tech directors, and the choir council presidents. This year’s show is directed by seniors Annie Lee, Ryan Taylor, and Megan Kelley, juniors Ben Chen and Lily Vastine, and choir council presidents, seniors Nishita Nair and Paige Cason.

“What do Pops directors not do? Because the show is all run by students, directors are the ones in charge of everything,” said Kelley. “We chose the theme, picked songs, picked who sang them, start daily rehearsals, created choreography, made original arrangements of songs, and so much more.”

Pops is completely different from other choir concerts too. While the students sing pop music, they also dance in almost every song.

“Instead of singing choral music, we are singing all of your favorite pop songs, and we include lots of dancing into the show to make it even more exciting,” Kelley said. “It’s also a way to give students from different classes a chance to sing together.”

The pressure was really put on for the students this year because they only had three weeks to put a show together. Once students got back from their winter break, they began learning the choreography and vocals for the songs. They even practice outside of school to put in extra work. But despite all the stress, the students have a fun time and enjoy themselves.

“My favorite thing about Pops is the friendships that have formed during the rehearsal process. By the end of the show, we really feel like one big family,” Kelley said.