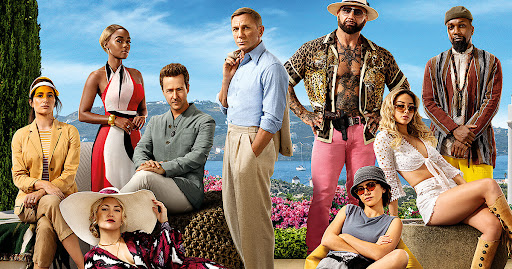 You are cordially invited to Miles Bron’s Glass Onion mansion for a murder mystery extravaganza. Please bring your wit, charm, and best poker face. You’ll need them to succeed—the winner gets an iPad. Oh, and beware. Someone’s behind you.

The murder mystery is one of few genres that can simultaneously stress its audience out while also leaving them with an odd feeling of joy by the end. One thing’s for sure: the genre is captivating and “Glass Onion: A Knives Out Mystery” is no exception.

On the heels of an Oscar nomination for his 2019 box office hit, writer and director Rian Johnson still knows how to write an engaging whodunnit. “Knives-Out” is a near-perfect film. Much of this is attributed to Johnson’s sharp writing (hence the Oscar nomination), his cleverly misguiding direction, and the overall terrific performances from the cast—especially Ana de Armas. However, it is the political commentary on the American social class that is at the center of “Knives Out.” With such a profound core message mixed in this comedic mystery, audiences were left to wonder: what would Johnson tackle next? And, moreover, how can he top this?

These questions are answered in “Glass Onion,” which moves famed detective Benoit Blanc away from the New England mansion setting of the first film to a private island in the middle of the Aegean Sea. This setting immediately creates a grandeur that is not present in the first film. Everything in “Glass Onion” is much, for lack of a better term, bigger than in “Knives Out.” This new setting is somewhat jarring initially, especially after the first “Knives Out” emphasized a small and cozy environment. The setting of this Glass Onion mansion is much colder. Where Johnson allows the audience to get comfortable in the Thrombey’s East Coast mansion, the audience can’t help but feel uneasy in this glass atmosphere. A layer of cynicism, and even worry, is added in this change of setting.

This shift in setting parallels the changes in the new script Johnson wrote. Audiences can be reassured: Johnson’s sharp writing has not dulled in the three years between films. If anything, it’s sharpened. Many critics have described “Glass Onion” as being even “twistier” than its predecessor. Audiences can expect the same edge-of-their-seat tension felt in the first film.

The ending to “Glass Onion,” however, is bound to leave some mixed feelings in the audience. Let me be clear, the ending is not bad by any means, but it feels rushed. Without spoiling much, it is not what happens in the ending that feels slightly unearned, but how it happens.

Where “Knives Out” truly shines over “Glass Onion,” however, is through its cast of characters. The characters in “Glass Onion” are well-written and acted and are uniquely original and distinctly different from their 2019 counterparts. However, the bar was set so high in “Knives Out” and it could not be beat in the character department.

The most interesting of these new characters is Andi Brand, slyly portrayed by Janelle Monáe, who gives what is perhaps the best performance of their career. Brand’s character has the largest emotional arch of the entire film. While, like its predecessor, “Glass Onion” is filled with fantastic performances from an all-star cast, Monáe’s performance serves as the glue that holds the emotional core of the film together.

It is this emotional core that guides the ultimate social commentary of the film: this time being the impacts and influence of political and business corruption. Choosing to tackle this social issue demonstrates Johnson’s willingness and ability to keep up with and tell stories that comment on the current political landscape. Furthermore, he’s able to ground these very modern commentaries in a genre that has its roots in a 20th century setting. Monáe’s performance makes us even further care about these issues, emphasizing the point of Johnson’s script.

Is “Glass Onion” as good as “Knives Out?” No. But it is still a highly entertaining film with a great cast and clever script.

So, reader, I hope you have enjoyed your stay. We hope this experience did not scar you too much. Would you consider coming back? A third party is already in the making…