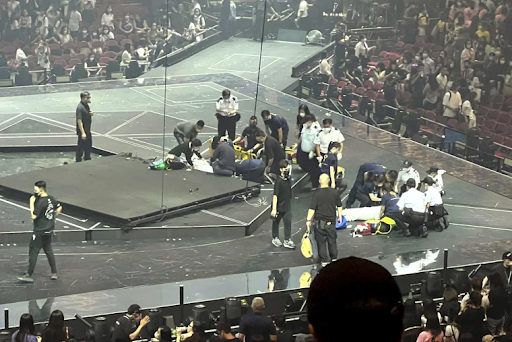 Imagine the shining lights, dazzling stage effects, and the feeling of performing while in front of a loud cheering audience. Internationally this is a dream career for many, and with all its benefits such as fame, recognition, and passion for performance many are eager to accept the challenges. However, there are still serious downsides to such a taxing career that music and art industries tend to hide. In Asia, however, these standards are heightened to extremes causing great concern for the health of those in the industry as well as how it affects the mindset of the youth audience.

On July 28, 2022, a large LED video screen fell on top of the Hong Kong boy band, Mirror, mid-performance raising concerns about the well-being and safety of dancers. The screen collapsed on three back-up dancers. According to South China Morning Post (SCMP), at least one of them was seriously injured. None of the band members were wounded. Dancer Mo Li suffered major damage to his neck and had two surgeries done as a result. He was left fighting for his life and now faces paralysis from the neck down with a five percent chance of recovery; a huge blow to his career and life.

This incident sparked outrage among the public as well as other larger figures in the Canto-pop industry. An investigation was launched on the stage mechanism and how the hanging screen above the stage functioned. It was discovered that it was due to metal fatigue of the suspension cord—a wire fracturing that led to the screen’s collapse as reported by CNN after interviewing Kevin Yeung, Hong Kong’s culture secretary. This led to rising suspicions upon how the stage and performance schedule was managed throughout Mirror’s 12-day tour, which was canceled after the second day.

Those who had attended the concert were left traumatized.Many reportedly sought therapy during the aftermath. Attendees also demanded a full refund because of the incident. SCMP eventually revealed that it was true, that there was barely any practice time prior, and that a group member had fallen from the stage the day before.

All over the world, some are aware of the risks and hazards of being part of an entertainment or art industry, including things such as modeling, acting, or dancing. Such negatives like cyberbullying, unrealistic expectations and standards for personality and body type, talent and toxic environments can both affect the performer, as well as their audience. Any entertainment industry would hope to maintain such standards such as being visually attractive and having a strict requirement of outstanding talent.

This once again brings up the topic of how much stress and deadlines are pushed upon Asian groups and performers in order to make the most profit and satisfy their fans.

This affects other Asian genres of music such as the K-pop industry, notorious for its toxic industry, culture, and environment. With artists constantly being pushed to release music almost every few months in some cases, this takes its toll. Combined with music production, interviews, interactions with the public, and more, this can cause high stress and negative impacts to mental health. Constant overworking along with receiving hate and cyberbullying can truly impact performers’ mental and physical wellbeing. There is no outlet for such stressors as the need to be professional is much greater, let alone even if they do, many companies will take no such action to improve their environment or treatment. Idols are left with little support in lesser known companies, and could even be prevented from seeking resources. Examples of this include the more recent tragedies of suicide among three K-Pop idols: Kim Jonghyun, Goo Hara, and Sulli, all within two years from 2017 to 2019. Almost all of the reasons for this were due to the toxic standards upheld in Korea and cyberbullying. Goo and Sulli faced harsh online criticism and slut shaming before their deaths, and Johnhyun left a note stating: “The life of fame was not for me”.

This of course brings up the toxic culture of weight loss and unhealthy body standards. They are forced to uphold a “pale, thin, doll-like standard” in order to be visually appealing. This is a problematic issue as this affects the viewers, especially youth that feel the need to replicate those standards in order to be attractive. This leads to a harmful cycle of dieting and can develop into eating disorders as it leads fans to think such unrealistic body type is achievable.

Many harmful standards and practices that are upheld in the Asian entertainment industry need to end. Not only do they impact the mental and physical wellbeing of the artist, but influence the audience as well with unhealthy standards. There are already many protesting for more awareness about these issues. People must be mindful of how the things they see for entertainment may not be fully real and that much of the things they see on camera can be fake. Thus, the normalized ideas and standards upheld in Asian arts and entertainment cannot be taken at face value and people should take the time to be aware of such influence.